The qualifying in Bahrain was very close. Mick Schumacher did well, but Sebastian Vettel immediately experienced a major setback. There was a real thriller up front.

Sebastian Vettel has made a big false start in his new mission at Aston Martin. The 33-year-old was eliminated in qualifying at the season opener in Bahrain in the first section and only finished 18th – one place ahead of debutant Mick Schumacher, but not much more was possible for him in the defeated Haas racing car. After all, the German hopeful was able to beat his teammate Nikita Masepin directly again.

For the 22-year-old, the early end in qualifying for the opening race in Formula 1 came as no surprise. “Very briefly, but still really happy in the end,” said Mick Schumacher on Saturday in the Sakhir desert: “We knew that there wasn’t much going forward, but we were close.”

Vettel was already fighting in the training sessions with the car that was new to him, but Q2 seemed achievable – but in the chaotic last minutes of the session, a spin by Masepin caused yellow flags. Vettel also lost some time as a result and could not improve any more.

“I think we should have been more careful, we should have positioned ourselves better,” said Vettel afterwards, “but in retrospect you are always smarter, that hit us hard today, of course.” 18th place – what a false start.

At the very front, however, there was a head-to-head race: In the end, Max Verstappen prevailed razor-thinly ahead of Lewis Hamilton and secured pole in the race on Sunday in Sakhir (from 5 p.m. in the live ticker at t-online). Verstappen relegated the world champion to second place by almost four tenths of a second. Hamilton’s team-mate Valtteri Bottas was third.

For Verstappen it was only the fourth pole position of his career and the second in a row: He was also right at the front at the season finale in Abu Dhabi last December and then won the race.

Corona crisis – Mitte and Freisinn condemn the “dictatorship” rhetoric of...

Tande: ski jumper in a coma – Norway boss with an...

Cathy Hummels talks about the use of masks on the plane... 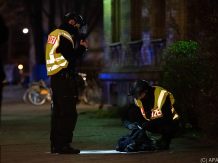