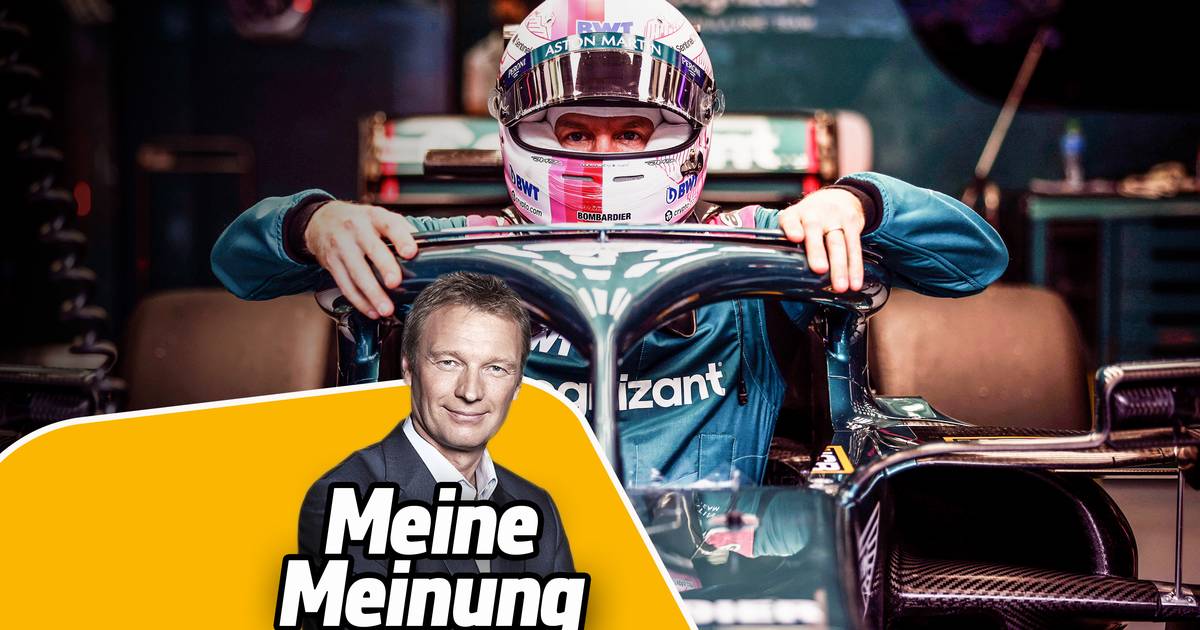 the return of the Schumacher name has thrilled F1 fans around the world.

Does Mick have the talent of Michael, is there a second Schumacher heroic legend? How soon will he gain a foothold? Can he counter the attacks of team mate Nikita Mazepin, who has been well known since they were together in Formula 2 at least for unpacking nasty matents on the slopes? I claim that the meticulous worker brand nice son-in-law will put the rough leg in its place and go its way in the premier class. (Formula 1: The Bahrain Grand Prix on Sunday from 5 p.m. in the LIVETICKER).

Released from the pressure of the crude Ferrari times, the Heppenheimer will bring a breath of fresh air to the renamed team. Thanks to his experience and doggedness in the fight for even the smallest detail, the car, which was victorious last year, will enable another step forward. Bond feeling not only thanks to racing green. Vettel will flourish, we will see the famous Vettel finger more often again. (SERVICE: The Formula 1 racing calendar 2021)

For Mercedes, the air is getting a little thinner at the top. HONDA wants to say goodbye to Formula 1 with a big exclamation mark! That’s why the engine was revamped again. The bottom line is that there are so many changes to individual parts that it is almost a new drive. More compact and powerful. (The results from Bahrain)

This means that there are more RED BULL race wins in the air than in previous years. And Verstappen is a sniper! If he smells an opportunity, he grabs with all determination, hell come out. He’s going to kick Hamilton a lot. OK then! Tingling factor! Nevertheless: you don’t kill a twelve-tailed horse with loud barking. Top dog Mercedes will defend its territory because the overall package is still the best. But it gets more varied at the top.

In addition, the clash of generations: Hamilton (36) against Verstappen (23), the regent against his successor – that is representative of the duels in the individual levels with comparable technical potential. Can the “old sacks” defend themselves against the emerging “young frogs” and assert themselves?

A Vettel (33) against a Lando Norris (21), for example. McLaren is well on the way to its old strength, and the team is flourishing under the leadership of Andreas Seidl. Both have the same engines as Mercedes customers!

Behind the duel between old diva and late comebacker Alonso (39) against Leclerc (23), according to ex-teammate Vettel, a talent of the century. The two-time world champion from Spain is still a vicious cobra, Leclerc unshakable in his self-confidence.

Age President Kimi Räikkönen (41), who has been with us since 2001, will certainly feel the hot breath of George Russell (23) in the Williams and Yuki Tsunoda (20) in the Alpha Tauri in his Alfa Romeo. Are the youngsters sending the Finns into retirement?

Verstappen and Russell at Mercedes?

It will be interesting to see how the individuals get into position and talk, because with the new technical regulations there may be a complete change in the driver line-up for some teams after this year. McLaren managing director Zak Brown is counting on George Russell and Max Verstappen as the driver pairing at Mercedes from next season. Why not?

Should Lewis Hamilton really be saturated after winning his eighth world title and step down, a few “old hands” are still lurking for their chance of a seat on a top team. As if there was Daniel Ricciardo, who is still highly talented and motivated to the tip of his hair, who has already proven that he can achieve victories with top material. In terms of marketing, the Nice Guy from Down Under cannot be beaten anyway. (All Formula 1 races in LIVETICKER)

Sergio Perez now has the chance to get to Ricciardo level at RED BULL. Carlos Sainz Jr. will receive a completely different media attention at Ferrari than in previous years. Can be a booster for him, but also become a blocker if you have to constantly represent the team’s weaknesses to the outside world and at the same time have to live with the frustration of a lack of results. Because Ferrari will not take off in 2021.

Ferrari is fully committed to 2022

The Scuderia has already said goodbye to the current technology issue internally. The Reds fully bet on 2022. But the Spaniard has a lot of potential, has matured and consolidated as a personality! Leclerc should be on the lookout!

Likewise the makers of Formula 1. The hunt several times around the globe with an XXL format calendar swollen to 23 GPs is brave in times of pandemic. A naive approach? Or the right signal that brings hope? I bet on the latter. The store is organized so professionally that it will work for the most part!

And therefore – gentlemen – start your engines!

Musk: Tesla could merge with other manufacturers

US Congressman dies of corona at the age of 41

Top fight in the Bundesliga – German Bavaria against international Leipzig...

Bares for rarities: You buy cheap picture frames – then the...