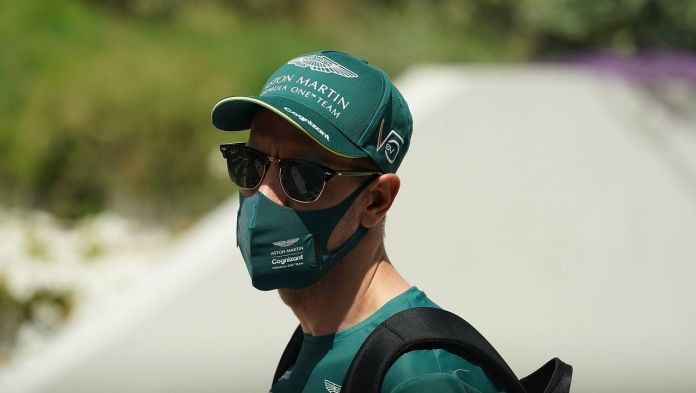 Sebastian Vettel has to go to the end of the starting grid for the opening race of the Formula 1 season this Sunday (5 p.m. CEST, TV: Sky) after a subsequent penalty. According to the stewards, he had violated the requirements for double-waving yellow flags in qualifying for the Bahrain Grand Prix on Saturday.
They sanctioned the offense on Sunday two and a half hours before the race with a deferral of five places on the grid. There are also three penalty points. Vettel now has to start from last place. In the knockout elimination, he did not get past 18th place out of 20 drivers in his new Aston Martin.
The offense happened towards the end of the first period when Vettel wanted to tackle another fast lap on the course in the Sakhir desert. The Russian newcomer Nikita Masepin was on the track after a spin with his Haas racing car in the first corner. According to the race stewards, Vettel should not have adhered to the requirement that no significant lap time should be driven for safety reasons in the event of a double yellow phase.

Flags had not yet been waved

As »Motorsport Magazin« and »Motorsport Total« report, the yellow flags were not even waved when Vettel passed the place in question. Vettel is said to have said in the hearing that he only saw smoke and did not know whether it was a brake or a stationary car. The stewards would not have accepted the explanation because a vehicle on the route would automatically result in a double yellow phase. Vettel also did not cancel his round.

Where Germany is still world class

Diem instead of Libra – Facebook’s cryptocurrency with a new name

“I was vaccinated with AstraZeneca and I am so grateful!” –...