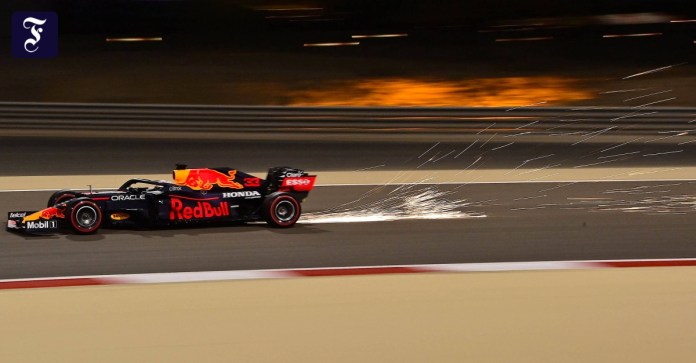 Whe is the fastest in the new Formula 1 season? Even after the first two hours of training for the Bahraini Grand Prix this Sunday (5 p.m. CEST / Sky Sport F1), it is still too early to make a reliable forecast. The racing teams refer to the first hour of truth on Saturday, the qualification training (4 p.m.), when nothing is hidden, the tank is almost empty and the engine is released.

If the trend continues, Max Verstappen will be in the lead in the Red Bull. The Dutchman drove the fastest over a lap in the test drives and couldn’t be beaten on Friday either: “I’m satisfied. But there are still a few things we can improve. ”Maybe need to. Because Mercedes seems to be sitting on the back of the Austrian team, apparently has the unstable rear of the W12 under control two weeks ago: “It could have been worse,” said team boss Toto Wolff about third place for Lewis Hamilton (0.235 seconds back) and Fifth place for Valtteri Bottas (0.37) in training in the evening: “It will be a tough fight with Red Bull over the entire season.”

If you take the lap times from Friday as a basis, McLaren, now back on the road with Mercedes engines, will also be expected in the grid race. The young Englishman Lando Norris prevailed twice against the experienced Australian Daniel Ricciardo and was only a touch (0.095 seconds) above the lap time of Verstappen. Ricciardo will probably have to get used to his new car and the new team until things run smoothly. Team boss Andreas Seidl was confirmed on Friday: McLaren has come a step further.

Ferrari landed surprisingly far ahead. And that with Carlos Sainz, Sebastian Vettel’s successor. The Spaniard left Charles Leclerc behind by half a second in the second round, which speaks less for the weakness of the Monegasque than for the strength of the Ferrari. The new V6 turbo engine seems to have significantly more power than the previous year’s version. During the test drives two weeks ago, the Scuderia looked significantly worse. Was that a bluff or did the Italians already show everything on Friday?

Only one thing is certain: the Formula 1 midfield is as tightly packed as it has been for a long time. The first 15 drivers were within a second. Ricciardo in sixth and Fernando Alonso in the Alpine (15th) were half a second apart. That could be lucky for Sebastian Vettel. Without the mistake in the target curve, he would not only have finished 14th (+0.9) in the test sprint, but would have landed at the height of his team-mate Lance Stroll (8th, 0.5 seconds behind Verstappen).

Like Ricciardo, the Hessian still has scope for individual improvement: he lost around 100 laps due to technical problems during the test drives, so he enjoyed little break-in time. “Every lap is good for me,” said the four-time world champion. “I try a little more braking and steering, the way the car drives or wants to be driven.” In the first practice session he was just ahead of Stroll, and when simulating the Grand Prix distance, he was faster than the Canadian. There is no reason to be happy. Because compared to the top teams, Aston Martin did not offer a good performance in the endurance run. “There is still a lack of consistency,” added Vettel, “but let’s look at qualifying first. There will be a step forward. I’m also confident about the race. “

Verstappen and Hamilton made by far the best impression on Sunday’s test run. Mick Schumacher will not be able to intervene in this game. As expected, the 22-year-old German sits in one of the slowest cars at his Formula 1 premiere, with no chance of building on his father’s dream result almost 30 years ago. To the astonishment of all observers, Michael Schumacher raced to seventh place in his first qualifying in 1991 at Spa Francorchamps. In the race he retired in the Jordan after a few hundred meters due to a damaged clutch.

His son will probably get on in the Haas. But the pace is only enough for a fight against your own teammate and possibly one of the two Williams. On Friday, Schumacher met his requirements. He left Nikita Masepin behind twice in the second Haas and also Nicola Latifi in the Williams. More was not possible. Schumacher sees it differently – in the long run: “I feel good in the car. But I know that as a driver I can still improve significantly and influence the lap time. “

“Embarrassing!”: Sam Dylan shoots his friend Rafi in the Fernzoff

Practical and stylish at the same time: If you do not...

19 – Corona self-tests in stores from Saturday

Tesla has deposited a security deposit – construction can continue