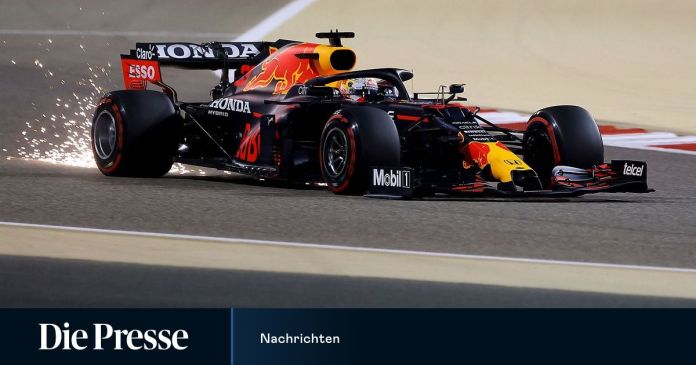 For Verstappen it was the fourth pole position in his career, Hamilton and Bottas were behind.

Max Verstappen secured his first pole position in the new Formula 1 year. The Dutchman was 0.388 seconds faster than defending champion Lewis Hamilton in qualifying in Sakhir on Saturday in his Red Bull. The Brit relegated his Mercedes team-mate Valtteri Bottas to third place. For Verstappen it was the fourth pole position in his career. The new season starts on Sunday (5 p.m. / live ServusTV, Sky) with the Bahrain Grand Prix.

Verstappen had previously set the fastest time in all training sessions on the Bahrain International Circuit. “We had a great week of testing, but there is no guarantee that it will continue in the races,” emphasized the 23-year-old. “But now the car has been driving very well all week, it was really fun,” he added. “A perfect start,” said Red Bull team boss Christian Horner. It was the first time in the V6 turbo hybrid era since 2014 that a Mercedes bolide did not position itself right at the front before the first race.

In the pre-season test drives in Bahrain, Verstappen was also the fastest. It has now been confirmed that Red Bull Racing has put together a strong package, even though newcomer Sergio Perez in the second car did not make it into the Q3 segment in eleventh place. Charles Leclerc parks his Ferrari in fourth place on Sunday, followed by Pierre Gasly in the AlphaTauri and the two McLaren of Daniel Ricciardo and Lando Norris. Carlos Sainz in the second Ferrari, returnees Fernando Alonso with Alpine and Lance Stroll in the Aston Martin complete the top ten.

In addition to a powerful Honda engine, Red Bull apparently also benefits from the new aerodynamics rules, which required a trimmed underbody. Specifically, teams like Red Bull and AlphaTauri should benefit from their relatively high angle of attack, i.e. lower ground clearance at the front compared to the rear. “Our analyzes have definitely shown that the concept lost less downforce with a high angle of attack than with a low angle of attack,” admitted Mercedes Motorsport Director Toto Wolff.

Verstappen took pole in the final attempt, and on his last lap he even outstripped Hamilton. “Fortunately we showed the performance,” he said curtly. His rival, who has already been celebrated seven times as world champion, congratulated him on his performance. “I squeezed absolutely everything, but unfortunately it wasn’t good enough. There is always a little more, but today it was the best I could show what the car has done,” said Hamilton.

“Tomorrow we need a good, clean start, then we’ll see,” added Verstappen. “I hope that the start is successful, then we should be able to control the race relatively,” said Red Bull advisor Helmut Marko at ServusTV. “2013 was the last time we had a pole position at the beginning of the season,” recalled the Styrian. The then Pole man from Melbourne, Sebastian Vettel, was also world champion for the last time that year – that could be a good omen.

Eight years later, things are not going according to plan for the German. The Aston Martin driver had to be content with 18th place. After all, he is still one position ahead of his compatriot Mick Schumacher, who gives his premier performance in an F1 Grand Prix on Sunday in the defeated Haas car.

Aston Martin: This is how Sebastian Vettel helped even before the...

James Levine – Obituary: First an ovation, then the crash