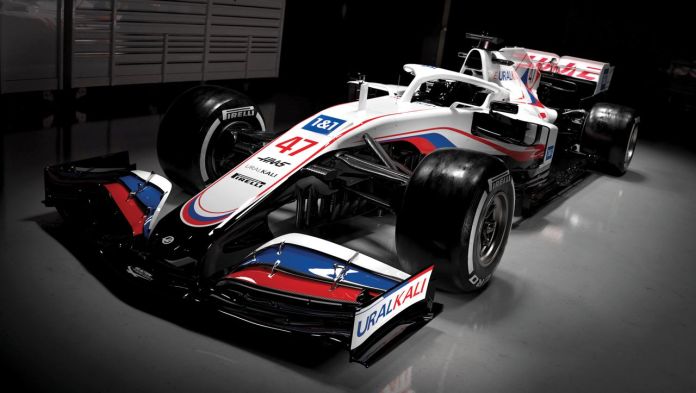 After the presentation of the new Formula 1 racing car for the new season, the Haas racing team may face consequences. As the World Anti-Doping Agency (Wada) announced to the British specialist magazine »Autosport«, the matter will be investigated »with the responsible authorities«. Mick Schumacher will also drive for Haas in the new season.
The US racing team presented the paintwork of its cars on Thursday and caused a sensation. The VF-21 is completely in white, red and blue and will be launched on March 28th at the start of the season in Bahrain.
The Russian flag can be seen on the front wing and engine cover with little imagination, but it will be banned from world sport up to and including 2022. That was decided by the CAS International Sports Court on the grounds of doping manipulation. The Russian anthem is also affected by the two-year ban.

»Painting clarified with the Fia«

The team had “clarified the paintwork with the Fia,” announced the World Automobile Federation on request from the Sports Information Service. “The CAS ruling does not prohibit the use of the colors of the Russian flag.” Haas team boss Günther Steiner also stated that the paintwork had been discussed.

The 22-year-old Masepin should not be entirely innocent of the new design of the car, which was still silver-red last season. The new title sponsor of the clammy racing team is Ural-Kali, the chemical company of Russian billionaire Dimitri Masepin – father of Nikita. Dimitri Masepin is said to have good relations with Russian ruler Vladimir Putin.

Attack on security guard: Presidential dogs fly out of the White...

The EU is tackling Internet providers