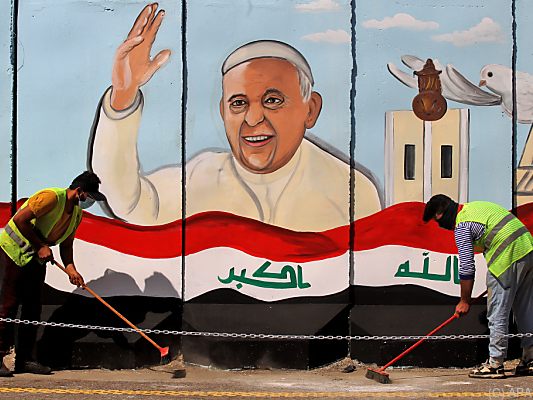 Pope Francis is expected on Friday for a four-day visit to Iraq. It is the first trip by a head of the Catholic Church to the country of around 40 million people, the vast majority of whom are Muslim. In the capital, Baghdad, the 84-year-old will meet Prime Minister Mustafa al-Kasimi and President Barham Salih. Talks with representatives of civil society and the local church are also planned.

In addition to Baghdad, Francis also wants to travel to other parts of the country. The Argentine also meets the high Shiite cleric Grand Ayatollah Ali al-Sistani. The program also includes an interreligious encounter in the plain of Ur, from which, according to biblical tradition, Abraham originated. In the cities of Mosul (Mosul) and Karakosch in northern Iraq he wants to meet members of the Christian minority.

In the run-up to the trip, there was criticism because the Pope, who has already been vaccinated against the corona virus, is visiting the country in the middle of the pandemic. The corona situation in Iraq had recently worsened again. The security situation had also worsened again in the past few weeks. In January one of the worst attacks by the terrorist militia “Islamic State” (IS) in Baghdad took place in years.

“Cyberpunk 2077” on Nintendo Switch? It becomes possible with a...

Corona: Sweden has to deviate from the special route – numbers...

“We’re running out of time.”

There could be a crash today between Merkel and ministers

The aftermath of the mayor election in Stuttgart: hanging the posters...

“Let’s seize the chance”: Germany hopes that relations with the USA...

Podium place in Crans-Montana – after criticism and in pain: Gut-Behrami’s...