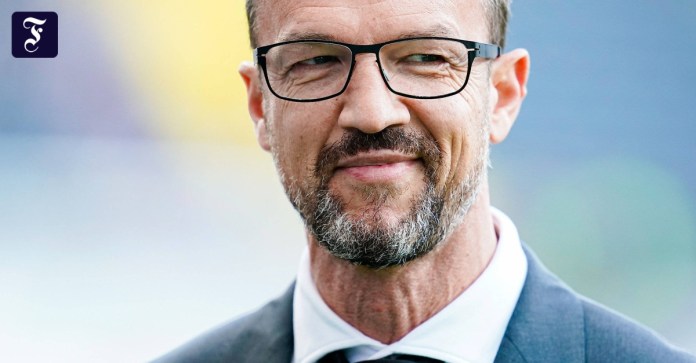 Ja, divorce tends to be a messy business. Many hurt feelings prevent logical decisions to the detriment of all. In the case of separation between Frankfurt Eintracht and sports director Fredi Bobic, the chances are still very good that it will be a peaceful breakup, without broken dishes, without horrific legal fees and without unhappy family members.

Why? Because it was never a love marriage, but a logical connection for the benefit of both parties. The pain that disappointed love produces does not torment anyone. Even without the burning passion one can speak of a happy relationship, because even without love it was a relationship full of respect and trust.

On the one hand, this was evident from the fact that Bobic always informed his colleagues when others advertised him. So in summer 2020 RB Leipzig. So in the winter of 20/21, when Hertha made an application. On the other hand, the commitment of Eintracht to keep the sports director unconditionally, to increase his salary so that he fulfills his contract by mid-2023, documented how satisfied she was with the liaison.

“I don’t want to fool around”

But four weeks ago, Bobic made up his mind that it was enough and asked for clearance. There was still a bond between the club and the manager. Even when the television channel “Sky” made Bobic’s willingness to change public on Monday, Eintracht and its sports board kept calm, even though the news came at an inopportune time. In the battle for the Champions League places in the Bundesliga, any distraction is a problem.

But then Bobic lost his composure on Tuesday. That he confirmed without pressure to leave Frankfurt this summer may still be explained by his personality: Bobic is a friend of clear statements: “I don’t want to fool around,” he said into the television cameras. But it was an awkward move. Because he has a valid contract. Without the benevolence of unity, he cannot leave it.

The fact that the 49-year-old Swabian went into detail afterwards, claiming that he wanted to end the relationship as early as 2020 and that he was only willing to hang on for another year because of the Corona crisis, was also an affront to his partner whose cooperation he is dependent on. The claim “Everyone knew about it” is a particularly bold one. Because there is no written agreement, just a memory of conversations. And from Eintracht’s point of view, this is completely different: Yes, Bobic felt in front of specific offers (Leipzig, Schalke), no, there was no specific wish to terminate the contract on a fixed date.

Whose perception is more accurate cannot be proven, only asserted by means of an oath. But the point is not at all decisive for the cause, at most for the reputation of the parties. The decisive factor is how the partners now behave.

On the side of unity, there are voices that, according to Bobic’s statements, would definitely welcome a war of the roses, that is, refused to release it and, if necessary, exempted it. But this opinion cannot be won by a majority. On Wednesday it was already apparent that the intention was to continue working together professionally. There are current issues, such as the contract extensions with Makoto Hasebe and squad planner Ben Manga.

At the same time, Eintracht is preparing to contractually regulate the separation from its sports directorate. On the one hand, it is about setting a transfer fee. Because Eintracht could also be forced to buy Bobic’s successor out of an existing contract. On the other hand, there will be a point that Bobic does not guide employees from Frankfurt to Berlin.

It’s not just about players, but also about members of the large team of coaches. One of Bobic’s strengths was to hire the best professionals in the medical department, game analysis and athletic training. A draft of the Eintracht position should be drawn up by the next meeting of the Board of Directors on March 10th. But first of all, it’s Hertha BSC’s turn.

At the same time, Eintracht has of course been looking for a successor to Bobic since Tuesday. Exploratory talks have been going on for three weeks since Bobic first asked for clearance. Accordingly, a frequently named candidate should not be available: Christoph Spycher. The sports director of Young Boys Bern does not want to breach his contract. The 42-year-old former Eintracht professional is under contract with the Swiss top club until the end of 2022. In 2018 Spycher and trainer Adi Hütter celebrated the Swiss championship together.

Numerous candidates are traded in the media, but a quick decision within a week is hardly conceivable, nor is it necessary. Eintracht is already well equipped for the coming season. Coach Hütter and squad planner Manga don’t have to set up a new team, they just have to add additions. The possibilities for a careful search are given.

Culture Committee advocates the establishment of a trust center to prevent...

“On” instead of “with” Corona: Covid patients die of “internal suffocation”

Alder Lake in notebooks – Intel plans with up to 19...