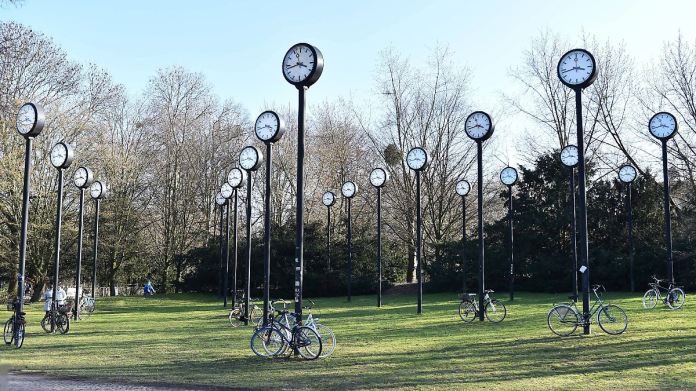 From March 28th it will be summer time
When will the time change end?

The time will be changed again on March 28th. Originally it was supposed to end soon. But the end of the time change in the EU is currently more than questionable. Because regardless of whether there will be summer or winter time for everyone in the future – in some countries this would lead to extremes.
It’s that time again: On Sunday morning, March 28th, the time will be changed. At 2 a.m., the clock moves one hour forward to 3 a.m. From then on, summer time will apply in Germany and the entire European Union (EU). But how long will this be done at all? The time change should actually be abolished at the end of 2021. This is what the EU Parliament decided in March 2019. But it is more than questionable whether this plan will actually be implemented.
Daylight saving time begins on March 28th Sleep less from Saturday to Sunday: Due to the time change, people in Germany will have a shorter night from Saturday to Sunday, March 28th. Precisely at 2 a.m. early on Sunday morning, the pointer moves to 3. Summer time then applies until the end of October.

The reason: The EU countries simply cannot agree on which time should apply in the future. Winter time comes into question – actually that normal Central European Time – or summer time, one hour later than winter time. Some EU countries prefer summer time because it gets light later in the morning, others prefer winter time because it gets light earlier in the morning. Portugal, Cyprus and Poland had spoken out in favor of summer time, while Finland, Denmark and the Netherlands were in favor of winter time. Like many other countries, Germany has not yet taken a clear position on this.

The core of the problem lies in the geography of the EU, as it spans three time zones. The largest of them, that of the Central European Period, extends from Spain to Poland. In the case of permanent summer time, on the Spanish Atlantic coast, for example, the sun would not rise until 10 a.m. on December 21. However, the effects would be less dramatic in Portugal, which is in a different time zone than Spain: In the Portuguese capital Lisbon, with a uniform summer time, the sun would rise at 9 a.m. even on the shortest day of the year.

So it is hardly surprising that Portugal is in a group with summer time advocates like Poland and Cyprus, even though the latter are thousands of kilometers further east. In Poland, permanent wintertime would result in extremes: in the east of the country, sunrise would already be at 3 a.m. at the end of June. Finland, in favor of winter time, does not have the same problem because it is in a different time zone than Poland: In Helsinki, on the longest day of the year, sunrise would not be until 4 a.m.

For Germany, on the other hand, it makes comparatively little difference whether there is permanent summer or winter time. A look at the extreme cases shows: If summer time is introduced as the only time, on the shortest day of the year (December 21) the sun in Emden in northern Germany would not rise until 9.45 a.m. and set shortly after 5 p.m. If winter time would always apply in Germany, however, on the longest day of the year (June 21) on Usedom it would be sunrise at around 3.30 a.m. and sunset at 8.30 p.m.

The Germans nevertheless have a clear opinion on the question of whether there should be permanent summer or winter time: According to a representative study by the Technical University of Ostwestfalen-Lippe and the market research institute Mo’web Research, the majority calls for permanent summer time.

In Germany, many people think little of the two clock changes every year. In surveys by the DAK, more than three quarters regularly say that the change from normal to summer time in March and the change from summer to normal time in October are superfluous and should be abolished. Even with one EU-wide online survey on the time change in 2018 84 percent of the participants their abolition. Of the 4.6 million respondents, however, were around three million Germans.

So far there has been no agreement between the EU countries as to which time should apply to all in the future. But it doesn’t work without a uniform line, because otherwise there is a risk of a patchwork of summer and winter time in Europe, which would make everything even more complicated. When the matter started in 2018, Austria held the Presidency of the Council of the EU and, although it was classified as a priority, failed in the attempt to reach a consensus among the member states. Germany did not push the issue forward during its Council Presidency last year. Portugal is currently the Presidency of the Council, and Slovenia will be in the second half of 2021. If there is no agreement, the end of the time change threatens to remain open.

At 90 on the Enterprise: William Shatner remains “Captain Kirk”

Praise and criticism after the decision on new corona measures

Hesse’s economy on Corona resolutions: “That will destroy companies in the...

“Scandalous miscarriage of justice”: Trump railed against the Supreme Court Mayor Luger of Linz calls for quarantine for test refusers