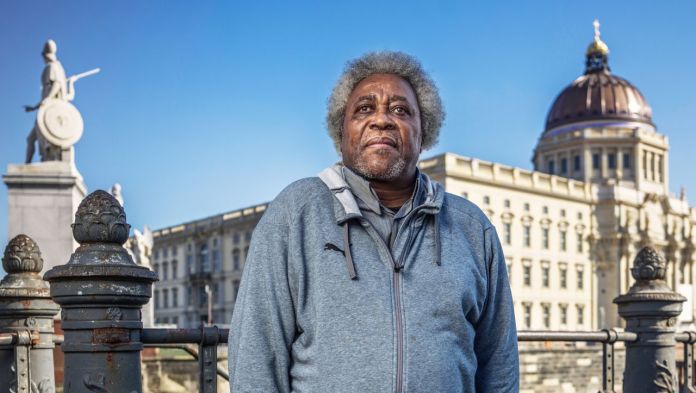 “Look at the moon! What do you see? ”Asks Grandma Tawaia. “Nothing!” Yawns Mnyaka Sururu Mboro, four or five years old, into the Tanzanian full moon night. “Make an effort!” Orders the grandmother sternly. The little one squints his eyes and stares at the moon, which bathes the huts at the foot of Kilimanjaro in milky light.
“If you look closely, you can see a shadow,” says Tawaia. “There’s someone sitting in the moon: Carl Peters is sitting there.” Tawaia told her astonished grandson that God had banished the founder of the “Colony of German East Africa” ​​to the moon as a punishment for his violent crimes.
The people of East Africa spoke of the “Mkono-wa-banu”, the “man with the bloody hand” – “Hänge-Peters” was what the Social Democrats called him in the German Empire. The sadistic pastor’s son was Reich Commissioner for the Kilimanjaro area from 1891. He untied everyone who got in his way: insurgents, rivals, even his bed slave.
“Peters enjoyed the sight of dying people over lunch,” says Mnyaka Sururu Mboro, now 69, and anger flashes from his eyes. The German colonialist installed a maximally brutal repressive regime in East Africa. It is also because of him that Mboro is now sitting here, in the “Dekoloniale” room: a project co-initiated by Mboro to make colonial history visible in Berlin-Mitte, almost 7,000 kilometers as the crow flies from his home.

“I have to find Mangi Meli’s head and bring it back to Tanzania,” says Mboro. “Like it or not. I promised my grandma Tawaia. ”Mangi Meli, prince of the Tanzanian people of the Chagga, was knotted by the Germans on March 2, 1900 in Moshi – true to the tradition established by“ Hänge-Peters ”.

The colonial rulers cut off the head of the murdered man, freed it from the remains of meat and, according to tradition, sent the skull to the empire. Scientists there tore each other for bones from Africa.


Mangi Meli, Prince of Chagga, was hanged by German colonialists on March 2, 1900


Human Remains: This is the name given to the skulls and bones, but also organs, hair and skins of the deceased who were shipped to Germany by crates during the colonial era. According to the Austrian doctor Felix von Luschan, they were supposed to satisfy the anthropologist’s “instinctive and insatiable” hunger “for ever larger series of skulls. Race researchers like Luschan and Rudolf von Virchow measured the human remains in the service of science and thus underpinned the supposed superiority of the Europeans.
How many “human remains” from former colonies are currently gathering dust in the depots of German archives, museums and universities is not precisely recorded. Andreas Winkelmann, anatomy professor at the Brandenburg Medical School Theodor Fontane, estimates the number of non-European human remains for Berlin at around 10,000, according to Winkelmann there are around 20,000 in Germany.

Almost 5500 severed heads are stored in the Berlin »S-Archiv« (S stands for skull) of the Prussian Cultural Heritage Foundation – Luschan brought 1,150 human heads with him from the former German East Africa alone. Other German cities literally have corpses in their basements: magazines full of skulls, bones and other body parts. Where to start looking for the head of the Manga Meli? “I imagined it would be easier,” says Mboro, smiling thoughtfully.

Born in 1951 in the village of Kishimundu near Moshi, Mboro loved his grandmother’s stories. Again and again she told of Mangi Meli, hero of the anti-colonial resistance. Unlike his father Rindi, who had supported the German “Schutztruppen”, Chief Meli defied the exploiters.

As the leader of the Chagga from 1891, Meli refused to pay the “hut tax” demanded by the Germans and organized an uprising. Despite better armament, the colonialists suffered heavy losses. For a time Meli came to terms with the Germans, but was accused of conspiracy, sentenced to death by the German captain Kurt Johannes and hanged on March 2, 1900 with 18 other Chagga princes in Moshi.

“If the head is missing, everything falls apart”: The search for the stolen prince’s skull

“At Meli’s, they tied the rope so that it didn’t die straight away, but slowly and painfully suffocated,” says Mboro. The agony lasted seven hours, after all an officer killed Meli with a shot in the head like a head of cattle. The skull was separated from the trunk and taken away.

Since then, the Chagga have been in an uproar. Whether drought, locust plague or disease: Every hardship is associated with the stolen head Melis – “even the corona pandemic,” says Mboro. In the Chagga tradition, a corpse is excavated after a year, its skull is placed in a clay pot and is reburied with a view of Mount Kilimanjaro. “If the head is missing, everything falls apart,” emphasizes Mboro.

“My grandson brings us back the head of Mangi Meli!”
Tawaia, Großmutter von Mnyaka Sururu Mboro
The joy in Tanzania was all the greater when the prospective civil engineer secured a scholarship for Germany at the end of 1977. “When my grandma found out about this, she ran out of the hut and shouted her joy out into the night,” says Mboro: “My grandson is bringing us back the head of Mangi Meli!”

But nobody in Germany was interested in the story of the severed prince’s skull. First Mboro asked his German teacher, then the students and professors at the university – he got head shakes everywhere. “People thought I was an idiot,” Mboro recalls. Instead of helping him, they insulted the Tanzanian with the N-word and refused him a beer in a pub.

Because he refused to leave the restaurant, the landlord called the police. “She put me in a sobering cell, even though I hadn’t taken a drop,” says Mboro and laughs softly. The man with the turned walking stick looks tired, exhausted from decades of struggle. His grandma has been dead since 1979 – and the Chagga hero’s head has still not appeared.

But that’s no longer the only concern for him: The Tanzanian, who worked as a trainer for the German Development Service, wants to shake up the Germans and make them aware of the colonial crimes in Africa. He has been organizing demos and campaigns in Berlin since the 1980s, commemorating the long-neglected chapter in German history.

Tribute to the butcher of men

The Maji Maij uprising of 1905? Hardly anyone knows today. After an uprising against the colonial rulers in German East Africa, the war and famine claimed up to 300,000 local victims in two years – around a third of the population at the time.

With like-minded people Mboro drumming loudly through Berlin, rolling oil drums filled with sand through the streets, laying himself in heavy chains. “How can you name your streets after criminals?” He asks. Petersallee, Lüderitzstraße, Nachtigalplatz: The “African” quarter in Berlin-Wedding honors the founders of the German colonies in Africa – at least some of the unscrupulous exploiters and butchers of human beings.

The city has been discussing renaming for years, and activists such as Mboro have already achieved initial successes: The new namesake of Mohrenstrasse in Mitte is Anton Wilhelm Amo, the first African philosopher in Germany. The Neukölln Wissmannstraße, dedicated to the brutal colonial officer Hermann von Wissmann, will be called Lucy-Lameck-Straße from April 23rd – after the first female member of the Tanzanian parliament.

Petersallee, named after “Hänge-Peters” by the Nazis in 1939, is also to be given a new name. “There’s still a lot to be done,” says Mboro. The Berlin Postkolonial association, which he co-founded in 2007, campaigns for the renaming of streets as well as for the return of looted cultural assets, archaeological finds and human remains.

In a key issues paper in 2019, the federal, state and local authorities reached agreement that “human remains from colonial contexts are to be traced back”. But first the origin has to be researched: a time-consuming and sometimes inconclusive procedure.

Mboro made several inquiries to the Prussian Cultural Heritage Foundation (SPK), in whose depots thousands of human remains are stored. In the beginning the brickwork was built, he says – and only after some hesitation did he agree to clarify the origin of the “human remains”. One result of this provenance research: Six skulls owned by the SPK come from the Kilimanjaro region, Mangi Meli’s homeland.

Mboro drew hope: in 2018 he invited Isaria Meli, the aged grandson of the folk hero Mangi Meli, to Berlin, the two of them arranged for a DNA sample. Experts compared them with the genetic makeup of the six skulls. The result was negative – and the Chagga people were appalled. “Many people doubt that I’m really trying to find the head,” says Mboro. “You think I am having fun and only drink beer in Germany.”

Under the acacia, on which the Germans attached Mangi Meli, a memorial has been commemorating the Tanzanian folk hero since 2019

After all, there has been a memorial in the Chagga Center Moshi since 2019, with a permanent exhibition and a bust of the murdered hero. Right next to the acacia as high as a house, where he was publicly executed in 1900, Mangi Meli looks down from a pedestal, grim and gold-colored.

Mboro wants to keep searching until one day he finds the real hero’s head. Scientists have informed him that there are still six skulls from Tanzania in Dresden and two in Rostock. And even 32 in Strasbourg, all from the Kilimanjaro region. Mboro wants to get in touch with the French next: “I’m not giving up.”

He owes it to many people. The chagga. His grandma. And also his great-grandfather: as a slave laborer, the man sabotaged the construction of the East African Usambara railway at the end of the 19th century and set fire to the camp with the many pickaxes. Since then, the family of Mnyaka Sururu Mboro has carried the colonial injustice in their name: “Sururu” is Swahili – and means “pickaxe”.

That’s why more couples fail this year than ever before

Will the next Fabio Quartararo be on a Ducati?

Pop singer Guildo Horn has “gotten fat” due to Corona

Corona in Germany: State has the highest incidence value – and...