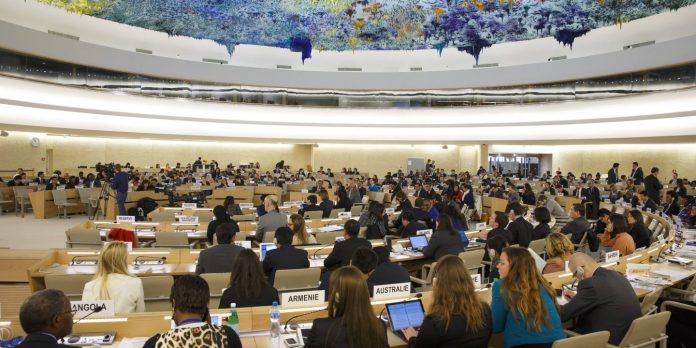 Just a few days ago, Israel’s President Reuven Rivlin praised Germany during his short visit to Berlin – and spoke of a “real friendship” between the two countries that had developed in recent years.

EMBARGO But this friendship got a little damper on Tuesday. With a shake of the head, it was stated in Israel that Germany – currently a member of the Geneva-based Human Rights Council of the United Nations – voted for a resolution calling for an arms embargo against Israel.

In point 16 of the motion, which Germany co-decided, »expressly urges all states« to refrain from passing on war weapons to the conflicting parties if they »come to the assessment that there is a clear risk that these weapons may be used to inspect or alleviate serious injuries or Violations of international human rights norms or serious violations of international humanitarian law «served.

AGENDA The Council resolution, like so many others, is not binding. Nevertheless, it was heard with irritation that although Great Britain, Austria, the Czech Republic, Bulgaria and other European countries refused to approve the paper, the German UN delegation in the Human Rights Council approved it.

The anti-Israel motion had almost traditionally been tabled by Pakistan, Venezuela, the Palestinians and a few other states. This time the Human Rights Council discussed the matter under agenda item 2 – some diplomats have already seen this as progress.

Because normally the UN body Israel buttons itself in a specially created so-called »Item 7« on the agenda. Alleged violations of the Jewish state in the areas called OPT in UN jargon and conquered by Israel in the Six Day War in 1967 are detailed there. Some countries, including Great Britain, are now refusing the mandatory Israel bashing under Item 7 and then leaving the meeting room.

This was not necessary this time. The British UN representative Julian Braithwaite explicitly spoke in the debate of a positive signal from the Palestinian side, even if his country did not approve the motion in the end despite criticism of Israel on some points.

VACCINE SUPPLY Because even the resolution text passed this time did not spare sharp criticism of Israel’s occupation. The paper dealt with more than 20 problematic individual aspects. In almost everyone, Israel, as the “occupying power”, was given sole responsibility. Misconduct on the part of the Palestinians, on the other hand, was hardly mentioned with a single syllable.

In addition to the usual criticism of Israel, the UN text this year also demands that Israel grant the Palestinians “non-discriminatory access to vaccines against the coronavirus” in cooperation with the “government of the State of Palestine”. This is an “obligation under international law,” the Council claimed in the declaration passed with 32 votes in favor and six against. The declaration does not address the Oslo Accords, in which the health sector was transferred to the Palestinian Authority.

Austria’s ambassador to the United Nations in Geneva, Elisabeth Tichy-Fisslberger, took the floor as the second speaker in the debate. It issued a jointly prepared statement for the EU. She thanked the Palestinians for having approved the merging of agenda items 2 and 7, but then did not say how the EU states in the Council would react to the resolution.

Israel’s UN representative Meirav Eilon Shahar said the resolution was “one-sided and distorting” and only served to harden the conflict on the ground. None of this has anything to do with reality. Hamas is not even mentioned; the Palestinians would be absolved of all responsibility for problems, while Israel stood there as the bogeyman. Countries that agreed to such a resolution could not act as honest mediators in the Middle East conflict, said Eilon Shahar.

EUROPEANS DISAGREE But that didn’t stop Germany, Denmark, France, Italy, the Netherlands and Poland from raising their hands for the paper. Austria, Brazil, Bulgaria, Cameroon, Malawi and Togo voted no, eight other member states abstained. Bahrain, which signed a peace agreement with Israel a few months ago, did not take part in the vote.

While 17 states abstained from voting last year, the majority on Tuesday was again significantly larger in favor of the sharp condemnation of Israel. Germany also made a contribution again. Why wasn’t immediately clear. At the request of the Jewish General, the Federal Foreign Office (AA) said that the German government was campaigning against unfair treatment of Israel in the United Nations. This is particularly true of the Human Rights Council.

MINISTRY OF FOREIGN AFFAIRS The aim is to reduce the number of “Item 7 resolutions”, which has been achieved this year. Of the original four resolutions, the Palestinians have only introduced two. According to the Foreign Office, this was the “result of intensive negotiations with the Palestinians” that the EU had jointly conducted. The vote had not been discussed in advance in the federal cabinet, but Foreign Minister Maas was entrusted with the matter, it said.

Efforts are being made to ensure that Europeans vote as uniformly as possible. This is the only way to exert influence in the negotiations. There is also an exchange with Israel.

The AA went on to say that an arms embargo against Israel cannot be derived from the resolution passed yesterday. The request to the international community to observe the principles of international law in the context of the Middle East conflict and to take into account the potential effects of arms deliveries on the conflict can also be found in UN resolutions on other regions.

On Wednesday, Israel’s ambassador in Vienna, Mordechai Rodgold, thanked the Austrian government on Twitter for their voting behavior. His colleague Jeremy Issacharoff in Berlin did not comment.

Authorities are looking for 10,000 British tourists in ski resorts

A new “shutdown” threatens in the USA