In the current lockdown discussion, Germany’s prime ministers have seriously debated whether garden chairs are actually pieces of furniture and whether nail modeling is part of body-hugging services. That night it was about “cage fights” – they should be allowed and only disappeared from the decision paper last night – probably after a long discussion. The very idea of ​​how such discussions go makes you blush in the face of a country that manages itself so under-worthy. I find it incredibly self-righteous to seriously discuss such details instead of considering perspectives. It is the methods of bygone centuries that are chosen. Spread fear and lock up! Opportunities and Perspectives? The discussion is vehemently stalled. And why? Because we obviously do not trust our fellow human beings to sensibly put a test stick into their noses and test themselves. The land of poets and thinkers considers itself incapable of self-smear.

Allegedly, there are not enough rapid tests available, argues the government. Why? Because the countries around us have been using rapid tests for weeks and have made millions of purchases. The district administrator of Böblingen, one of the few who has been using the rapid test strategy for weeks, says clearly: “There are enough tests on the market”. It couldn’t be any clearer. Pharmacists confirm: “If there is a need, we can organize 10 million rapid tests within a few days”. In Austria, tests have been carried out in schools twice a week for weeks. Thousands of children and teachers have already been found and chains of infection broken. In the meantime, we are making the same mistake as we did with the masks, with tests in front of retirement homes and with vaccinations.

Where in the past you had to rob a bank in order to be punished, it is now enough to rest on a bench.

Total failure in mask discussion is repeated in rapid tests

But first things first: First there was the typically German mask discussion. At first we didn’t need any of that while the world was covering up in masks. When the time came, the market was empty. That should be better with the FFP-2 masks. With the help of the bureaucracy. The state is creating forgery-proof authorization certificates for FFP-2 masks for over 9 million euros. These will then be sent to the 34 million eligible citizens by post for 27 million euros. So that these citizens can then get six masks in the pharmacy for an additional payment of two euros, which are available in the supermarket for 88 cents. The pharmacist then receives a grant of six euros per mask. That’s German thoroughness.

Then we discuss a supposedly far too expensive vaccine that is said to cost 54 euros per can. So we’re negotiating with the EU until the vaccine costs “only” 13 euros, but the USA, Israel and Great Britain have already ordered millions of doses. Then finally the vaccine is there and now there are currently around 2 million doses on the refrigerated shelves. Because the federal states fail to inoculate the vaccine. The reason: a rigid regulation of who is entitled to be vaccinated now. And woe, a leftover vaccine dose goes to a mayor, then the shit storm begins. Better to tip over than to break through the rigid plan, seems the motto. It’s a city again that defends itself against this madness – Krefeld simply starts vaccinating. Educators, teachers and police officers in the city in North Rhine-Westphalia simply get vaccinated – because there is so much vaccine available.

So now the quick test discussion. Not entirely new either. At first we didn’t have enough rapid tests for our retirement homes. After mayors like Boris Palmer in Tübingen demonstrated how it can be done and what an effective protection of the elderly looks like, an order was then placed. Only now was there a lack of staff in Germany who could carry out the tests. To top it all off: For ideological reasons, several refused to call the Bundeswehr waiting for help.

A country locked down between complacency and state failure

Incidentally, the government (rightly) is flooding the economy with the money of our grandchildren, even the Basic Law could soon be changed to justify the mountain of debt in a legally clean way. However, Germany is not in a position to program the website for the disbursement of the emergency aid in such a way that the money actually arrives. Result: At the beginning of March, a large part is still waiting for his promised November aid. Incidentally, even after a year of pandemic, the health authorities are still not completely digitized and are busy faxing around the area.

And what does the state do? Make up words like “no stay”. Where in the past you had to rob a bank in order to be punished, it is now enough to rest on a bench. Other police officers are busy advising people to wear a mask while jogging.

Mayors and district administrators in power!

After a year of pandemic, the slogan: “Don’t live so as not to die” is simply no longer enough. If we want the citizens not to lose faith in the state and politics for good, we need perspectives. These are on site. I am sure that if Germany’s mayors and district administrators decided on the measures together – without any federal or state government – we would not have many of the problems that we are discussing today. Münster, Tübingen, Rostock – the number of cities that go their own way is getting longer. And it has been proven that cities are the most successful in fighting the pandemic. The makers who tackle instead of administering have never sat in the Chancellery. They have always sat in Germany’s town halls!

Trump, Putin and the cyberattack on America

Raids in Berlin, Hamburg and on the Baltic Sea: traffickers are...

Government disagreed over control of freestyle tests in January 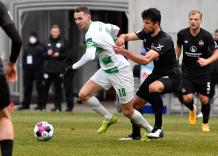 This Frankenderby was great sport – sport