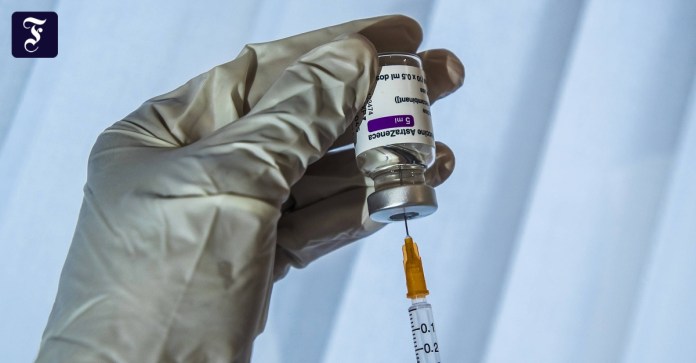 The whole world is talking about the coronavirus. All news and analyzes about the spread and control of the pandemic in your e-mail inbox every day.

They know everything better and didn’t understand how we should work. ”In fact, others were also amazed at the vaccination committee.

In January it stated that Astra-Zeneca was “currently only recommended for people aged 18 to 64 based on the data currently available”. The authority was only concerned with effectiveness; the vaccine had already been confirmed to be safe.

Nevertheless, this age restriction was a momentous decision. Because the Germans now doubted the vaccine. And instead of eighty-year-olds, thirty-year-old nurses were vaccinated with Astra-Zeneca; but they have a much lower risk of death.

The European Medicines Agency judged differently on approval. She recommended the vaccine for all adults. “There aren’t enough results among older participants (over 55 years of age) to provide a measure of how well the vaccine works in this group,” she said.

“However, protection is expected given the fact that an immune response is seen in this age group and because of the experience with other vaccines.” At the agency in which the German Paul Ehrlich Institute is involved, it sounded as if it had given a margin.

“Great respect” for the Stiko

The World Health Organization specifically recommended the vaccine for “the elderly, including those who are 65 years of age or older”. In the UK, Astra-Zeneca was immediately vaccinated against seniors. Why not in Germany?

Terhardt says: “That was brave of the British. We have a slightly more meticulous process. Many other European countries did the same as we did in Germany. Italy only recommended the vaccine up to the age of 55, France did it like us. “

The hygienist Frauke Mattner from the University of Witten / Herdecke defends the Germans. “England and Scotland have simply implemented a large public experiment across all age groups, from whose evaluations we now benefit,” she says, and finds the Germans brave, not the British. Before the decision of the vaccination commission, she had “great respect”, that was a “courageous decision”.

The vaccination commission, however, had worse data for its decision than the Europeans. It had effectiveness studies from Astra-Zeneca as of November 5th. Among the seniors, there had been a Covid case in 341 vaccinated people and one in 319 non-vaccinated people.

“If you calculate an effectiveness from this, it is unfortunately awful,” says Terhardt. The number of study participants was simply too small. The European authority, on the other hand, had studies as of December 8th, when there were twice as many test persons. The problem: The data of the Europeans were confidential and were not shared with the German vaccination commission.

Astra-Zeneca for all adults

For the Erlangen-based virologist Klaus Überla, who has been on the commission since 2017, only one decision was conceivable on this basis. “We need evidence that something works and that something is safe. And as long as that isn’t there, we don’t do any experiments. ”E

But there were also other voices in the commission, for example Terhardt’s. “We had to decide that with regret. If we had decided differently and things had gone bad, we would have been to blame. Personally, I was in doubt, I would have preferred to have been braver. I knew what would happen. “

The vaccine got an image problem, on ZDF the chairman of the vaccination commission, Thomas Mertens, said the whole thing “went somehow badly”. When better data came out, the Commission had to turn around. On Wednesday she decided to recommend Astra-Zeneca for all adults. The “previous recommendation of January 29th” was “completely correct on the basis of the data available at the time,” it said.

The Minister of Health of Baden-Württemberg, Manfred Lucha from the Greens, does not want to say a bad word about the vaccination commission. At most, he sees a certain timidness. “They really only want the best scientifically. And when there are doubts, they are more likely to give in to the doubt in order not to be vulnerable.

A standing vaccination committee is always on the defensive. In footballing terms, they defend and make sure they don’t get a goal. The politicians, on the other hand, have to score goals, “he says and has some advice:” The pandemic teaches us to be a bit more pragmatic and forward-looking. It’s a process that we all go through together. “

Cologne: Celebrity strolls past the cathedral – does nobody recognize him?