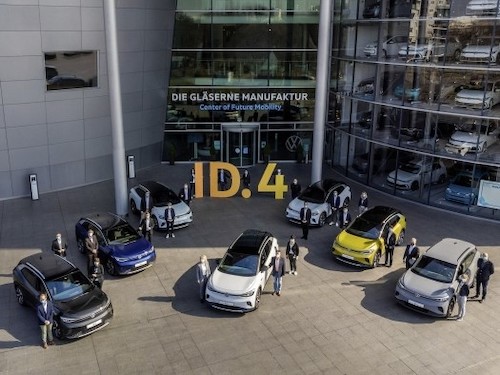 The first customers have taken delivery of their vehicles in Wolfsburg and Dresden – 23,500 orders for the ID.4 electric SUV have already been placed across Europe

The first customers in Germany have received their fully electric Volkswagen ID.4. Thousands of other customers will follow: VW plans to deliver around 150,000 ID.4s worldwide this year. By the end of February, 23,500 orders had already been placed across Europe – despite many car dealerships that were closed and before the official market launch in Germany.

Volkswagen Board Member for Sales Klaus Zellmer said: “We still have big plans – we want to deliver around 150,000 ID.4s worldwide this year alone. That is around a third of our 450,000 electric vehicles planned for 2021. The global car is therefore an essential pillar of our accelerated e-offensive. ”Another e-model from VW is to be launched every year.

The special thing about the handovers in Dresden and Wolfsburg: The first customers Jacqueline Heyer-Mertens and Mario Heyer from Suhl (Thuringia) as well as Matthias Hoeper from Oyten (Bremen) already drive the ID.303 and have now bought the ID.4.
At the same time, a large-scale training roadshow is running across Europe, in which more than 10,000 car dealership employees take part in Germany alone. In addition to training on the vehicle itself, all related topics of electromobility such as We Connect and charging are also trained.

The ID.4 can receive regular updates and new functions “over the air”. This ability is an important prerequisite for enabling new business models. The top models ID.4 Tech and ID.4 Max offer a digital world first: the augmented reality head-up display, which projects its displays into the driver’s field of vision and also dynamically displays selected symbols and fuses them with reality.

Like the ID.3, the ID.4 is produced in the Zwickau e-car plant with a carbon-neutral balance sheet and delivered to both locations in a carbon-neutral manner. The factory in Zwickau recently put a third shift on the second assembly line for the production of the ID. Family started. The aim is to produce more than 1,400 vehicles per working day in summer in order to meet the high demand for the world car and the ID. To satisfy family.

Oliver Pocher: Wendler is in trouble – now he is discovering...

Watch the 2nd Free Practice now for free in the RTL.de...

Messi honors Maradona with goal celebrations – and what else happened