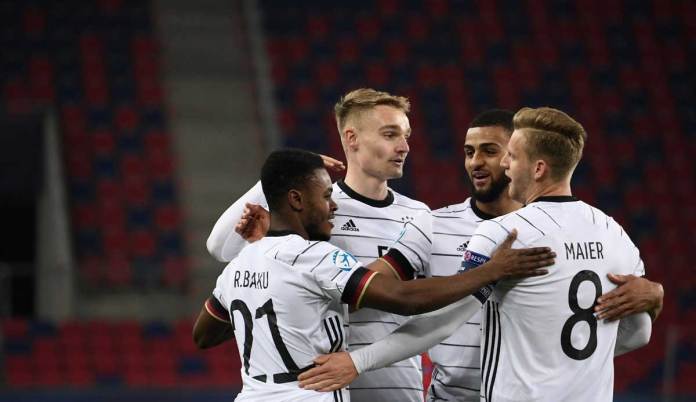 After the 3-0 victory at the start of the European Championship, the German U21 national team will face the Netherlands today. Here you can find out how you can follow the DFB team live on TV, live stream and live ticker.

In Group A, the German and Dutch U21 national teams will face each other at the European Championships in Slovenia and Hungary on Saturday, March 27th. The Hungarian city of Székesfehérvár will be used as the venue; the MOL Arena Sosto will be played at 9 p.m.

With another victory and a total of six points, Germany would already be qualified for the quarter-finals.

U21 European Championship – Group A: Schedule

Lukas Nmecha scored 1-0 in the opening win against Hungary.

U21 – Germany vs. Netherlands: EM today live on TV and live stream

German football fans have reason to be happy. The game against the Netherlands can be seen live and in full on free TV. The private broadcaster is responsible for the transmission ProSieben. 45 minutes before kick-off, viewers are prepared for the game in front of their screens with preliminary reports.

In addition, the game can also be followed in the free live stream at ran.de. The third and final group game against Romania on Tuesday (March 30th) will also be at ProSieben and ran.de be visible.

U21 – Germany vs. Netherlands: EM in the live ticker

At SPOX You can also follow Germany against the Netherlands in the form of a live ticker. All relevant actions such as goals, penalties, evictions or changes are ticked live for you.

In addition, you can also find the rest of today’s European Championship games in the live ticker SPOX.

BVB duo, ex-Bayern talent and Modric legacy: The Players to Watch at the U21 European Championship

U21 EM: The expected line-up of the Germans

U21: Germany’s Group A at a glance

The team of national coach Stefan Kuntz leads the table after the first matchday thanks to the 3-0 success against Hungary. Since Romania and the Netherlands only played 1-1 in the parallel game, the Germans can close the bag with a win and qualify for the knockout phase.

Carlos Menem is dead: Former President of Argentina died at the...

Corona in Germany and the world: Vacation bookings in Great Britain...