The Federal Government wants to do more for the rights of sexual minorities in foreign and development policy.

To this end, the cabinet has adopted a concept that provides for support to foreign organizations that campaign against discrimination against people on the basis of their sexual orientation. In addition, the topic is to play a greater role than before in development cooperation and in foreign policy institutions. In future, Germany’s diplomatic missions abroad are to keep a closer eye on the situation in the host country and report on it to the federal government. Internal further training of the staff is also planned, according to the concept paper, in order to raise awareness of the concerns of sexual minorities.

This message was broadcast on March 3rd, 2021 on Deutschlandfunk.

We can start right after Christmas

Dietikon / Geroldswil – “If a patient has Corona, we are... 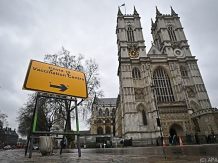 Number of new corona deaths in the UK has fallen dramatically... Extremism – Berlin – two suspects in custody after investigations into...