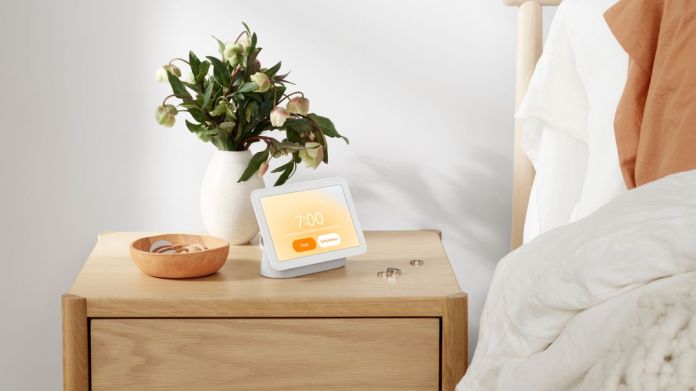 The second generation of the Google Nest Hub is here: the new smart display, like its predecessor, is coming onto the market with a 7-inch screen – but it offers a number of new functions. The loudspeaker with screen and voice assistant, for example, now has a sleep sensor that can detect movements and breathing and provides the user with information on the quality of their sleep based on the data. This does not work via a camera (which the Nest Hub does not have), but via the Motion Sense function, which also allows some applications to be controlled using hand gestures. Does the device keep what it promises? We tested it for you.

Nest Hub is heavily networked with other Google services

The setup of the Nest Hub runs smoothly: First, the device has to connect to the smartphone via the Google Home app. For example, the motion sense function or the sleep sensor can also be activated via the mobile phone. In addition, services such as Spotify and Netflix can be linked via the smart display. For many users, setting up photos and calls will be of particular interest. It quickly becomes clear that the Nest Hub is very closely networked with other Google apps: Google Photos is required to bring images to the display, and Google Duo for calls. The recipient must also have the latter installed in order to be able to call. The Google Fit app is also very much recommended to users, for example in order to be able to save and access the information collected by the sleep sensor on their mobile phones over the long term.

Networking with the many Google services doesn’t have to be a bad thing. However, if you are not yet familiar with photos, Duo, Fit and Co., you will have to be prepared for a longer set-up process in order to be able to enjoy all the functions of the Nest Hub. The Nest Hub is therefore particularly suitable for those who already use these apps – or who have installed smart home technology such as networked security cameras, thermostats and lamps in their own four walls. Because these can be controlled via the Nest Hub.

It is pleasing to see how quickly the Nest Hub converts voice inputs: the weather is shown on the display in seconds and announced via loudspeaker, and hits in Google searches are read out quickly. The voice assistant with display is also practical in the kitchen, for example: Cooking recipes can be easily called up, read out loud step by step and clearly illustrated on the display.

The smart display can quickly play music and videos on Spotify, YouTube and Netflix after a simple “OK Google”. Listening to music and watching TV shows with the Nest Hub is nice every now and then, but it’s not its forte. Because the display is a bit small for series and films. And the sound of the speakers is unfortunately not as clear and dynamic as hoped. Google previously announced that the Nest Hub has 50 percent more bass – and you can hear that too. But the speaker just sounds a bit too flat overall.

The Nest Hub is clearly best used in the bedroom. Since Google’s smart display has no camera and the microphone can be muted manually, users will also be more inclined to place the device next to the bed. According to Google, many users had already installed the previous model in the bedroom. After all, the Nest Hub can be used as a digital picture frame. The photos look good despite the comparatively moderate resolution of 1024 to 600 pixels: the colors appear very brilliant and sharp. A sensor also ensures that the brightness of the display is adapted to the lighting conditions. This means that pictures and videos always come into their own.

The sleep sensor is probably the decisive reason for storing the smart display on the bedside table. The setup was very short and easy because the Nest Hub calibrated the sleeping position in a few seconds and the device indicates very precisely where and how to position it for an accurate measurement of sleep. In the test, the function convinced thanks to the detailed recordings and the suggestions based on them for improving sleep. The amount of time you slept was measured fairly accurately. The information on whether one coughed or snored during the night and how high the breathing rate was during the night was also interesting.

After a few nights, users are shown tips on how to sleep on the display – for example, if the sleep rhythm is very inconsistent. Also practical: In short explanatory videos on YouTube that can be played on the display, users can find out more about healthy sleep. The daylight alarm clock, which gradually brightens the display pleasantly before you get up, is also positive, making it easier to jump out of bed. At night, the display does not interfere because it changes to a black background with a digital clock or, if desired, can even switch off completely and only come back on when the light comes on in the morning or the alarm clock goes off.

The sleep sensor is an important and successful function of the Nest Hub. That is precisely why it is a shame that, according to Google, the sleep sensor will only be offered in a pre-release version until next year. After that, a paid subscription may be necessary in order to continue using the function, according to Google. Depending on the level of costs, this could put some users off. Without the sleep sensor, the Motion Sense function would have little to offer: Currently, Motion Sense can only be used to switch music or the alarm clock on and off with hand gestures, for example. This is practical, but in the end it is simply not enough because it hardly exhausts the many possibilities of the function.

The second generation of the Google Nest Hub has proven to be a loyal companion in the test. Thanks to its slim design, the device, which costs 99.99 euros, can also be set up in the kitchen and bedroom. The sleep sensor, which provides valuable information about sleep, was particularly convincing in the test. Based on the data, the Nest Hub also gives tips on how to improve the quality of sleep. Photos also look good on the smart display, the colors are sharp, clear and brilliant. However, if you want to use the Nest Hub primarily for music and movies, you may be disappointed by the mediocre sound quality and the very small 7-inch display for videos. Google’s smart display is best kept on the bedside table to act as a picture frame during the day and as a sleep sensor at night.

BIS warns of risks in the bond market – risks in...