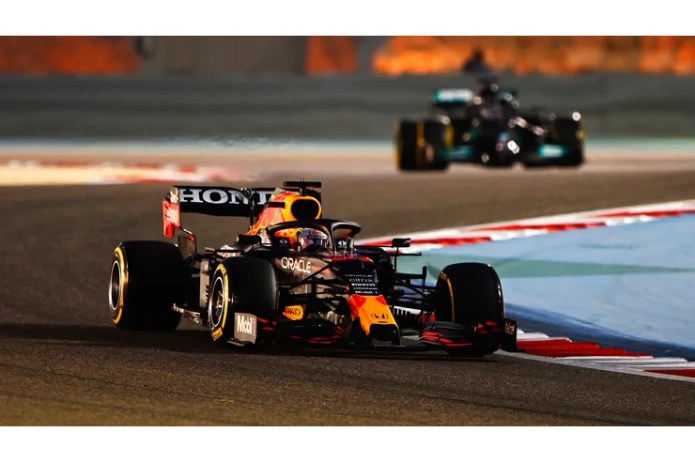 If it stays that way, Liberty can rub his hands together. There are only 0.923 seconds between the fastest training lap of the day and 15th place. These are conditions like in Formula 2. Mercedes is not a favorite for once. Red Bull confirmed its strong form from the test drives with two best times for Max Verstappen. Mercedes was two tenths short of the fastest lap in both training sessions. Lando Norris was among the top 3 in both practice sessions in his McLaren. Nevertheless, the Englishman said: “We’re not as fast as the lap times suggest.”

In the racing simulations, as expected, the gap widened a little. Verstappen and Hamilton were almost on par, but Mercedes believes that Red Bull only ran its Honda engine at reduced power. A direct comparison with the sister team Alpha Tauri suggests that. McLaren is already nine tenths behind in the long runs, Aston Martin 1.2 and Alpine 1.5 seconds.

Wilhelm
Sergio Perez has yet to improve to a quick lap.


Six things you need to know

1) Has Red Bull confirmed the role of favorite?

Even if team boss Christian Horner desperately wants to return the role of favorite to Mercedes. At the moment the Red Bull RB16B is the car of the hour. So far, all of the best times of the year have gone to Max Verstappen. When testing, in the first and second training session, at 42 degrees asphalt temperature in the afternoon and 31 degrees in the evening hours. Sergio Perez is still looking for his form on one lap, but was satisfied with his endurance runs. Verstappen’s lead over Mercedes is not that great. It is between two and three tenths.

Mercedes and McLaren are currently fighting over the role of crown prince behind Red Bull. That is the impression when comparing the fastest laps. It looks different with the long runs. Red Bull and Mercedes are also separated by two tenths. But McLaren is noticeably behind. The analysts attribute this to the fact that McLaren drove with more power on the fast laps than Mercedes and Red Bull. This is also underlined by the top speeds. Lando Norris was measured on the home straight at 320.3 km / h, Lewis Hamilton only 314.4 km / h and Max Verstappen only 311.5 km / h. If you take into account the outstanding top speeds of the Alpha Tauri with the Honda engine, the suspicion arises that Red Bull still has a lot up its sleeve when it comes to engine performance. Possibly more than Mercedes.

McLaren misses an average of nine tenths on the two top teams in the long run on medium tires. “Our fastest laps flatter us a bit. The car is better than last year in some areas, we are still missing something in other areas. I still lack full confidence in the medium-fast and fast corners,” admits Lando Norris. His prognosis: “I expect the two Red Bulls and the two Mercedes in front of me.” Daniel Ricciardo needs more time to get used to the team and the car: “I have to be patient. The laps weren’t bad, but they weren’t breathtaking either.” The Australian lost the majority of the time on his teammates in the first sector. 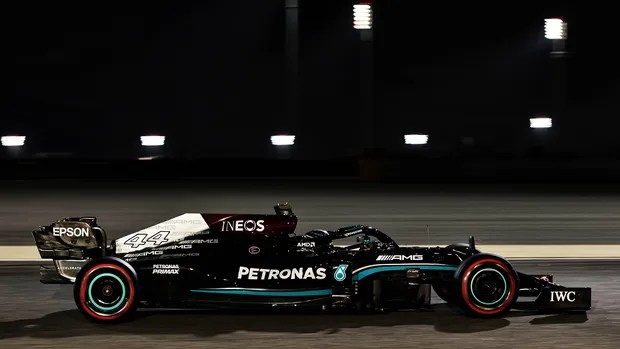 Mercedes were two tenths of a second missing on Red Bull on Friday training.

2) Has Mercedes solved its problems?

Mercedes team boss Toto Wolff stated in an initial analysis: “The rear is now more under control. We had to completely rebuild the aero balance in order to adapt it to the new tires.” We won’t know the full answer until Sunday. With almost no wind, the conditions were ideal for Mercedes. The test drives had shown that the W12 is particularly susceptible to wind. And on the day of the race there is even said to be a storm. Wolff therefore admits: “The best scenario we can hope for at the moment is to be on par with Red Bull.” The car drives in the same specification as it did two weeks ago in the test, but is much better balanced. The first day of training showed that the Mercedes is two tenths behind the World Cup opponent by one lap.

Hamilton was tied with Verstappen on his best lap up to Turn 13. Then the Dutchman drove away from the world champion by 0.235 seconds. In the racing simulations, the gap to Red Bull leveled off to less than a tenth of a second. Nevertheless, the defending champion remains skeptical: “The car hasn’t been where we want it to be. It looks better, but it’s still not perfect. Everything depends on stability. You want to have a stable car so that the tires have it Last long. That will be the key here in these conditions and in this wind. “

The weather forecast with a lot of wind from Saturday and temperatures ten degrees lower on Sunday does not exactly suit Mercedes. The test drives have clearly shown that, contrary to its usual practice, the Red Bull is much less susceptible to wind than the Mercedes.

Hamilton fears: “The rear is already not stable, but it will be the same for everyone. A little more for some, a little less for others.” My colleague Valtteri Bottas complained about a severe loss of grip. “At times the car was inaccessible.” The Finn had to cancel four laps because he came into conflict with the course limits. An indication of how hard Bottas had to struggle with his car. 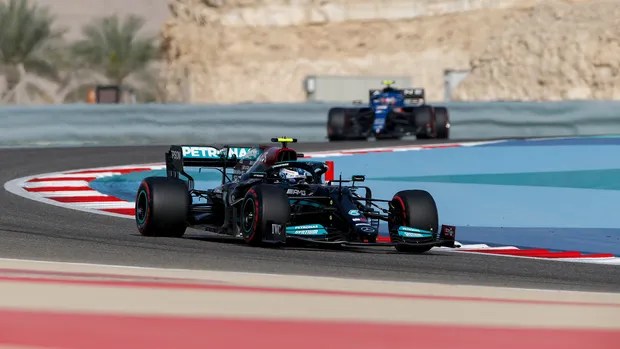 The field was close together in training. The fans and Liberty Media will hope it stays that way.

Max Verstappen led the ranking list in the evening training with 1.30.847 minutes. He was 1.9 seconds slower than his own best time in the test drives. This may be due to the higher asphalt temperatures than during the test, but also that all drivers were on their fast laps with more gasoline than during the test two weeks ago.

The sigh of relief after the first day of training was palpable. In contrast to previous years, Mercedes is no longer miles ahead. There is even reason to believe that the world champion will have to fight hard for his title this year. And that there are many teams who can hope for a podium. There was exactly 0.923 seconds between Verstappen and Fernando Alonso in 15th place. It has not been that close in Formula 1 for a long time.

Six different makes romped about in the first ten places: Red Bull, Mercedes, McLaren, Ferrari, Alpha Tauri and Aston Martin. Do the long runs confirm that too? The distance is a bit bigger there. Max Verstappen and Lewis Hamilton were on average around 1.5 seconds faster on the medium tires than Sebastian Vettel at the bottom of the flagpole. Nevertheless, the first day of training gives hope. The most exciting season in years is about to begin. 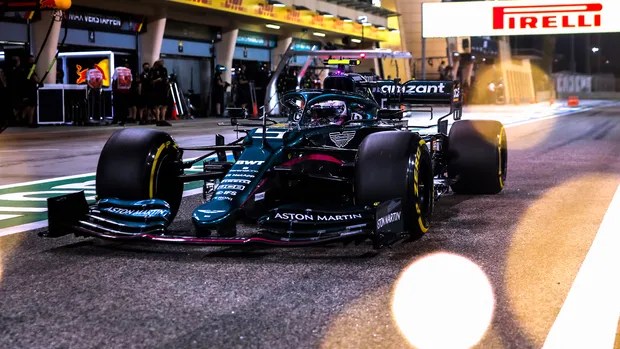 Sebastian Vettel is still looking for the right balance in the Aston Martin AMR21.

4) Where does Vettel stand in the Aston Martin?

Sebastian Vettel had at least one carefree day. The new Aston Martin driver completed 47 laps in two practice sessions. In the end, he finished 14th with a time of 1.31.769 minutes. Nine tenths behind the best time, four tenths behind his teammate Lance Stroll. Vettel lost most of the time in the target curve, where he drifted over the curbs and therefore could not accelerate optimally.

In the long run, Vettel lost an average of two and a half tenths on Stroll. The newcomer to the team still saw a light at the end of the tunnel: “Every lap helps me get used to the car and find my rhythm. The car feels promising in some corners, less in others. We still need a more constant balance Find.”

5) Who surprised, who disappointed?

If we compare the first day of training with the test drives, Red Bull has confirmed its good form. The same applies to the sister team Alpha Tauri. Yuki Tsunoda only lost three tenths per lap to Sergio Perez in the Red Bull. Mercedes has improved compared to the test drives, and McLaren presented itself even better than expected. At least for one round.

Aston Martin is not yet a candidate for the best places in the field of pursuers. Ferrari cut a better figure than in the test, Alpine a worse one. As expected, Alfa Romeo has caught up with midfield. We expected Williams and Haas to fight for the last places at the bottom of the field. 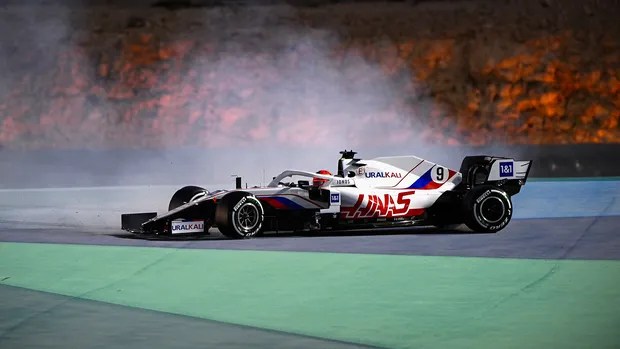 6) Does Haas stand a chance against Williams?

Nicolas Latifi is within reach of the Haas pilots. George Russell, on the other hand, drives a second faster than Mick Schumacher and Nikita Mazepin and is currently out of reach. Debutant Schumacher made a very solid impression on his first day at work. He was always faster than his team-mate, was even able to leave Latifi behind and made it through the first 40 official Formula 1 laps of his career without a single mistake.

On one lap, Schumacher’s lead was 0.152 seconds. In the long runs, the picture doesn’t look very promising compared to the competition. Schumacher lost 1.3 seconds per lap on the hard tires compared to Antonio Giovinazzi in the Alfa Romeo. Mazepin’s lag behind the car in front of him was even greater. That was Esteban Ocon in the Alpine. The Frenchman achieved an average lap time of 1.39.360 minutes over 14 laps. Mazepin only did nine laps, but was an average of 1.5 seconds slower at 1.40,807 minutes.

The end of the lockdown seems to be a long way...

Chancellor Shortly before Christmas: “Please let us be careful”

Schlager: Helene Fischer surprises with a confession – that’s how her...

Will “Grey’s Anatomy” -Meredith be replaced by a new doctor?