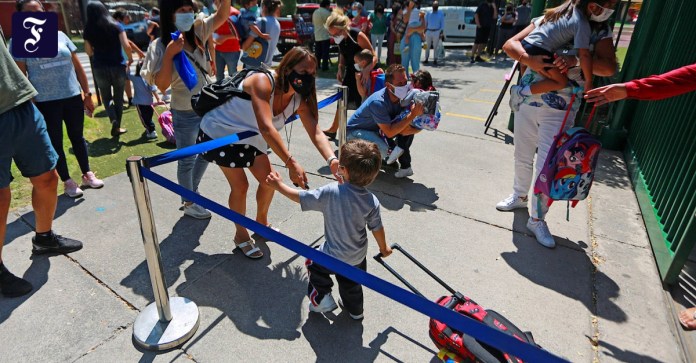 GGreat Britain plans to start vaccinating children as early as August. This emerges from the government’s preliminary plans, writes the newspaper “The Telegraph”. That would be months earlier than expected, it is said, citing two people involved in the plans. According to the report, the basis is the results of a study by Oxford University in collaboration with AstraZeneca with 300 test subjects aged 6 to 17 years, which should be available in June or July.

Israel, the country with the highest percentage of vaccinated citizens, has declared the vaccines it uses to be safe for teenagers and is currently vaccinating 16 and 17 year olds.

Proponents see mass vaccination of children as a way to minimize the spread of infection. Critics note that Covid does not pose a major health risk for young people. Therefore one should wait until the vaccines are better researched.

Vaccinated before the end of summer vacation

If Britain were to vaccinate its children at the current rate of around three million first doses per week from August onwards, most of the 11 million school-age children could be vaccinated before returning to school after the summer holidays.

On Tuesday, Britain commemorated the anniversary of the start of the first lockdown of its more than 126,000 corona deaths. Parliament in London observed a minute’s silence on Tuesday, and people also paused in hospitals and other facilities across the country. In the evening, people outside their front doors remembered the dead with lights, and a glass lantern burned outside the UK Prime Minister’s seat on Downing Street. Landmarks such as Canary Wharf and the London Eye ferris wheel, the Liver Building in Liverpool and the Blackpool Tower in the coastal city of the same name were illuminated in yellow.

Relaxation thanks to a successful vaccination campaign

Prime Minister Boris Johnson imposed the first corona lockdown on March 23, 2020. He ordered schools and most shops to be closed and strict restrictions on contact. For the British, a “very simple instruction: you have to stay at home,” Johnson said at the time.

Originally, the lockdown was supposed to end after three weeks. A year later, the third lockdown now applies in England. However, the requirements have already been relaxed. Thanks in part to the successful vaccination campaign, the situation in Great Britain has improved significantly.

Suspected mutations in Jochberg: Wastewater samples in the Unterland are now...