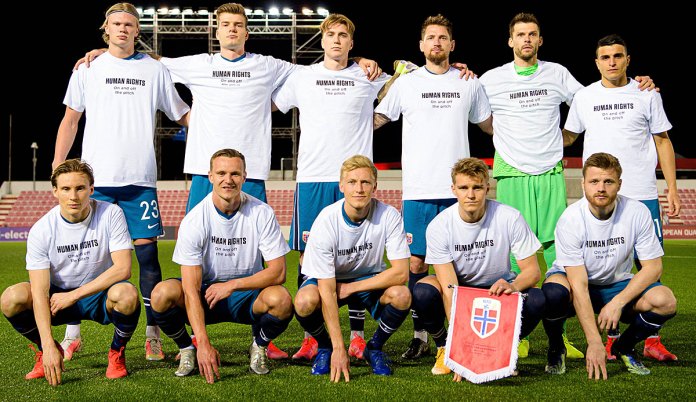 A clear message to Qatar: Erling Haaland and the Norwegian national team are sending a clear signal in the human rights discussion at the start of the World Cup qualification.

Erling Haaland tore his red training jacket from his massive upper body with a determined look and proudly presented his clear World Cup message: “Human rights – on and off the pitch”, read in black letters on the white shirt that the boy prodigy and his colleagues from the Norwegian national soccer team in Gibraltar showed an audience of millions in time for the first sounds of their national anthem.

A clear announcement to Qatar at the beginning of the qualification for the controversial World Cup in 2022 in the desert state.

“We want to focus on the things that were discussed in advance, and the boys really wanted to. And I’m setting a good example,” said national coach Staale Solbakken, who won the 3-0 (2-0) when football dwarf made his debut on the broadcaster TV2. The coach and the substitute players also wore the shirt, the former Cologne Bundesliga coach kept it on during the game under his black jacket.

During the warm-up, Haaland and his colleagues around the future goalscorer Alexander Sörloth (RB Leipzig) and Rune Jarstein (Hertha BSC) wore shirts with the inscription: “Respect – on and next to the pitch”. One wants to put pressure on the world association FIFA to act harder on Qatar, said Solbakken on Tuesday when he announced the action without going into details.

Norwegian football has been discussing a possible World Cup boycott for weeks, which several Norwegian first division clubs and fans are now supporting. Haaland and Co. want to compete in 2022 if they qualify, but will continue to set standards.

The action in Gibraltar could result in a FIFA penalty for the Norwegian association, which wants to vote on a boycott in June. This prohibits political messages in the context of their games.

The Norwegian branch of Amnesty International welcomed the message. “I am very happy that you have chosen it,” said Secretary General John Peder Egenaes. And the new captain Martin Ödegaard emphasized that the entire team was behind the announcement.

Matthias Walkner to return to the podium at the Dakar rally

Humboldt Forum in Berlin before the opening

Euro stable before the Ifo business climate is announced

Fear of blockade – Biden does not want an impeachment case... Jakob Blake case: LeBron James is outraged by the lack of...