Haaland and Co. in special shirts – this is how Norway protests against the World Cup in Qatar

Norway’s national football team caused a sensation at the start of the World Cup qualification even before the kick-off. The players wore two different T-shirts when they played in Gibraltar to draw attention to the problems surrounding the 2022 World Cup in Qatar. Most recently there were reports that more than 6,500 construction workers were killed in the host country of the tournament.

The warm-up contested Erling Haaland, the star striker of Borussia Dortmund, and his teammates in shirts with the words “Respect – on and off the pitch”.

After the teams returned from the dressing room to the field for the national anthems, the Norwegians wore a special shirt over their match jerseys. This time they did not demand respect, but the observance of human rights.

The game was played by the Norwegian selection in blue jerseys – without any special imprint. Thanks to hits from Alexander Sörloth, Kristian Thorstvedt and Jonas Svensson, Norway celebrated a 3-0 mandatory victory at the foot of the Affenfelsen.

The game was one of the World Cup qualifying group G. In the same group, Turkey started with a 4-2 home win against the Netherlands.

At the beginning of the month, six clubs from the highest Norwegian league asked the national association to boycott the World Cup in Qatar. However, this was not heard at the association headquarters.

FIFA President Gianni Infantino subsequently stressed that a World Cup boycott was not the right approach. One had to see the improvements that had already been made in Qatar in the area of ​​human rights issues. “Our position at FIFA has always been and always will be: engaging in dialogue and getting involved is the only and best way to bring about change,” said Infantino. (R.A.M)

All stadiums of the 2022 World Cup in Qatar

This is how Qatar is cooling its stadiums

Do you like to eat fish? Then maybe you should check out this Netflix documentary

What was originally intended as a homage to the great blue seas has turned into a spectacular story of revelation: the filmmaker Ali Tabrizi traveled halfway around the world for his documentary “Seaspiracy”, spoke to those responsible and often put himself in danger in order to Uncover hidden truths about the destruction of the oceans. In «Seaspiracy» the fishing industry and its enormous impact on the oceans and the climate are examined.

“Attack on Titan 4”: number of episodes and opening revealed 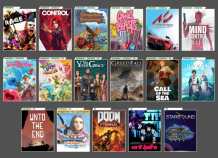 These are the new games for December 2020

Zuna about the KMN gang: “I have no more contact with...

Not properly delivered: Berlin may have to destroy Moderna vaccine –...