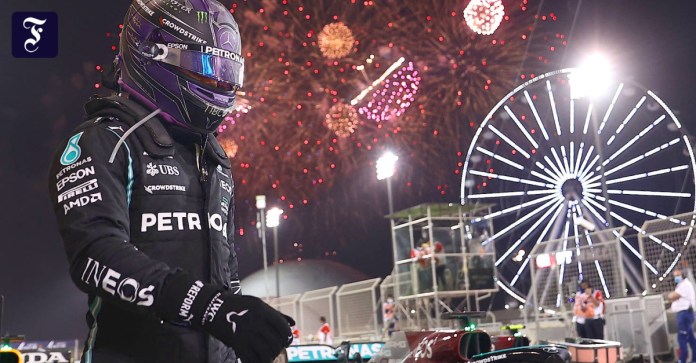 Dhe old picture, but a new tension. That is the message from Formula 1 this Sunday. World champion Lewis Hamilton won the first race of the season in Bahrain just ahead of Max Verstappen in the Red Bull and the retired Vatteri Bottas (36 seconds behind) in the second Mercedes. But it was up to Verstappen to win the premiere. The Dutchman drove the faster car, but had to give up the lead he had gained in the last laps at the behest of his team. “That is a very, very shame,” said the 23-year-old, looking morose while looking for a ray of hope: “There is also something positive. We can keep up, we can fight them. “

The race began with bad news for Red Bull. Sergio Perez stopped in the warm-up lap because the power supply failed. The Mexican was only able to continue after a short break, but had to start from the pit lane after the field of drivers had taken up line-up for the second time: last. Sebastian Vettel advanced so quickly. In qualifying training, the four-time world champion was only 18th. And because Hesse did not take the gas off the gas sufficiently on the last lap under the double yellow flag after Nikita Masepin spun in the Haas, the track inspectors punished him with being relocated to the end of the field.

The Aston Martin driver made rapid progress, the lights of the starting lights had hardly gone out: 14th on the first lap. But Masepin also got off the track in the Grand Prix, took a hit, didn’t get injured, but threw debris onto the track: safety car. Next attempt in front of some vaccinated or Covid-19 recovered viewers to get going. Vain. Verstappen stayed ahead of Hamilton at the flying start. But behind the two of them there was another crash. Pierre Gasly lost the front wing of his fixed Alpha Tauri in close combat and was eliminated. Mick Schumacher turned in the second, remaining Haas, at its premiere. A pirouette without major consequences. The German stayed in 18th place.

After the dust settled, the pecking order could be seen in the first of 23 Grand Prix. The top class of Formula 1 turned out to be a two-man club with Bottas in the anteroom: Verstappen against Hamilton. The challenger lost the lead on the way to the first pit stop because the chief pilot turned off earlier to change tires and then completed the so-called “undercut” on fresh tires: Verstappen was six seconds behind the Silver Arrow when he was on the hunt, freshly dispatched . If the team bosses of Red Bull and Mercedes are right, then the season’s premiere anticipates the big race over 22 further stations up to the second Advent: “It will be a fight,” said Christian Horner and Toto Wolff in unison.

It was a fight in the glaring light of the track lighting under the night sky. The star did not sink. But it was no longer as untouchable in its orbit around the rest of the field. By the second pit stop, Verstappen approached within two seconds, Hamilton and Mercedes felt the pressure, prevented an undercut by the Red Bull man in which they decided to stop for service earlier. After his second stop, Verstappen returned to the track a good seven seconds behind, encouraged by the race engineer to extend the class of the racing car, but to be careful with the tires: “Hold on to something!” No sooner said than done. With five laps to go, the Red Bull appeared full-frame in Hamilton’s rear-view mirror. He sought his salvation in the slipstream of colleagues to be lapped. The superstar under pressure – already he made a small driving mistake.

In the past year, the Silver Arrow would have shot away on the straights if Hamilton had saved himself more easily. But the new Honda engine in the rear is not only slimmer and therefore promotes aerodynamics. The drive also offers significantly more power. 53rd round: First attack, whoops over. But Verstappen left the route limit and crossed the white line. This is forbidden in training if punished. The race director had given approval for the Grand Prix, but withdrew it in the middle. So Verstappen had to take off the gas by order of his racing team. Hamilton slipped through again. New leadership. They went on, with the goal in mind, they shot into the last lap. One more try? Too late. “The tires then had no more grip,” said Verstappen and shrugged his shoulders. “It’s hard to lose a race like this,” says his team boss Christian Horner calmly, “but we shouldn’t allow any inconsistencies.”

And the Germans? As expected. A driver behind and an indisposed follower, one might believe when looking at the results. But Schumacher (16th) did well. Apart from the spin, he made a flawless debut in the slowest of all racing cars. Vettel was able to flash his fighting spirit, kept strong competitors behind him for a long time on fresher tires with skillful, sometimes breathtaking maneuvers.

But then the Heppenheimer crashed into the rear of the French Esteban Ocon in the Alpine. His mistake. The track inspectors saw it that way: ten seconds time penalty, 15. A disaster. In addition, there was a sobering realization: Team mate Lance Stroll’s tenth place, a good 86 seconds behind, shows the relapse of the team, which was still so fixed in 2020. McLaren and Ferrari are much faster over a lap and in endurance run. The Alpha Tauri also makes a better impression. Vettel won’t be able to score much, but he will have to.

“In terms of media, no amateur club in Germany can hold...

Japan’s economy is growing even faster than expected – coronavirus –

Berliner accuses: Mama’s corona death in the home could have been...

Mick Schumacher is about to make his Formula 1 debut