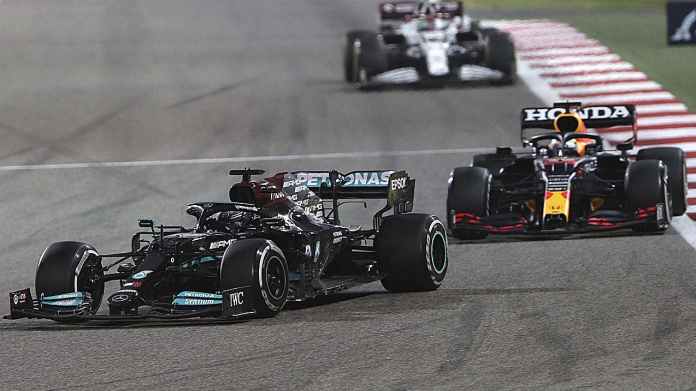 Lewis Hamilton in a Mercedes wins the season opener in Formula 1. The defending champion from England wins the Bahrain Grand Prix in Sakhir ahead of Max Verstappen in the Red Bull and team-mate Valtteri Bottas. The Alfa Romeo team came away empty-handed.

Hamilton and Verstappen fought a thrilling duel for victory in the Bahrain desert, which promises tension in the world championship fight. With four laps to go, Verstappen, who started from pole position but fell behind Hamilton after his two pit stops, passed the seven-time world champion. Because he strayed too far off the track during the overtaking maneuver after the start-finish straight and risked a 5-second penalty, he let Hamilton pass again.

After that, Verstappen couldn’t find any means to get back to first place. Hamilton saved a lead of seven tenths across the finish line and celebrated his 96th GP victory, further expanding his record. On the desert circuit in Sakhir, the seven-time world champion was the first to be flagged for the fifth time – another record. He had previously shared the record with Sebastian Vettel.

The Alfa Romeo team came away empty-handed. The Finn Kimi Räikkönen and the Italian Antonio Giovinazzi finished eleventh and twelfth, just behind the points.

The start of the first Formula 1 race of the season was only possible after the second attempt. The first attempt was abandoned because Sergio Perez stalled during the warm-up lap on his Red Bull debut. The Mexican, who clinched his only GP victory almost four months ago, had to drive out of the pit lane afterwards. He finished the race in 5th place after a strong chase behind Lando Norris in the McLaren.

Corona crisis is forcing more and more women in Mallorca into...

Historic decision: Donald Trump is the first US president to face...

Immerse yourself in dystopia with VR glasses