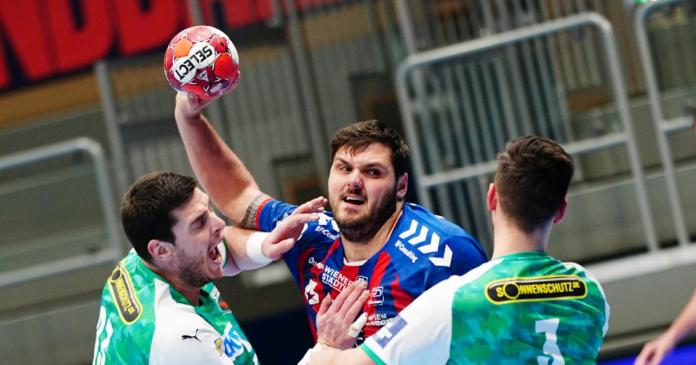 The Fivers from Margareten had the game of the year, maybe even the biggest game in history. Even getting into the group stage of the European Handball League was a great success for the Fivers Margareten after ten years of international absence. And then yesterday with the first leg of the first leg with Füchsen Berlin, an absolute top team came to Vienna. You are currently fourth in the German league.
Fivers coach Peter Eckl said: “I had to make sure that the players didn’t do too much. You can compare that when the fourth or fifth from England is the opponent in football. And that could be Liverpool. “
The Fivers played with a lot of speed and speed against the physically superior Berliners. So the big players wanted to get the Germans moving. Their coach Jaron Siewert said of his defense: “They are big, they are difficult, they take up a lot of space.”

Lots of pace of the fivers

And they found it a little difficult at first. The Viennese were 4: 3 ahead. But then they broke the thread a bit, they fell back to 4: 7. But the Fivers players showed morale leveled at 11:11 after 17 minutes. Then the Germans switched their defense, the Viennese didn’t score for six minutes, but they were only 11:13 behind. And after 27 minutes they equalized again at 15:15. Before the break, Wolfgang Filzwieser presented himself great in the Fivers goal, who held a number of difficult balls. But the Germans went into the break at 5:15 p.m.
Still, it was a respectable achievement. Especially since the figurehead Lukas Hutecek was canceled. Austria’s national team player broke his little finger on the throwing hand in the 35:32 victory in the Cup quarter-finals against Krems at the weekend and was operated on the day after the game.

Decision after the break

But after changing sides the break-in came. No goal was achieved for almost six minutes. The second half began with parades on the assembly line of the Berlin goalkeeper Dejan Milosavljev, which seemed to spur his teammates. While the confused and hectic Viennese only scored three goals in the first quarter of an hour of the second half, the Füchse sat down to 31:18 (45 .) and had the game under control. After all, the home side managed to push the deficit into the single-digit range in the finish – 27:35.

Case numbers: BAG reports 2727 new infections with the coronavirus and...

Corona hotspots: These are the 10 largest risk areas in Germany

Dispute over rent: Causa Landtmann is not an isolated case

Unprecedented rejection for Innsbruck’s Greens, coalition of four has burst

RTL announces the start date for the jungle show

Kretschmann threatens entrepreneurs: “Then we’ll do a real lockdown” – Germany