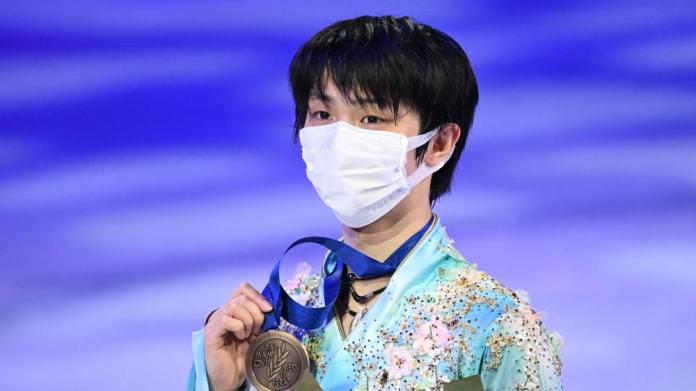 Want to be the first person to have a quadruple axel in a competition: Yuzuru Hanyu © APA / afp / JONATHAN NACKSTRAND

The duel for authority in figure skating between world champion Nathan Chen and Olympic champion Yuzuru Hanyu could lead to a new dimension at the 2022 Winter Games in Beijing.

After the phenomenal jumping festival of the American Chen in the freestyle at the Figure Skating World Championships in Stockholm, his arch-rival from Japan announced that he would add the most difficult variant to his rotating arsenal: “I want to start again practicing the fourfold axel because I want to be the first person to land him clean in a competition. “

The great Asian ice skating grandmaster does not want to let the defeat against Chen and the only 17-year-old compatriot Yuma Kagiyma, who pushed him to the bronze rank, sit on him. “I have a lot of ideas about the Olympic Games,” said Hanyu, who is celebrated like a national hero in his home country. “Good and bad experiences have made me a better runner. I will do everything I can to do my best. ”In Beijing, after 2014 and 2018, he is aiming for Olympic gold number three. So far, this has only been achieved by the Swede Gillis Grafström (1920, 1924, 1928).

After one of the best and most demanding freestyle in World Cup history with five perfect quadruple jumps, Nathan Chen has slipped into the role of favorite for the Beijing Games. “It’s hard to predict what the future will bring, a lot of things change quickly in a sport,” said 21-year-old from Salt Lake City. “Until then you will see runners trying crazy things.”He thinks that the number of quadruple jumps will be the success factor at the Olympics “definitely not right”. However, he does not rule out that the four-fold Axel could decide on gold. “That guy [Hanyu] will do it, so I have to figure out how to do it too, ”announced Chen, who has been unbeaten since 2018.

Chen is convincing all along the line

Perhaps what happens between the jumps will also make the difference for the frequent fliers in the Olympic arena: the ice art. With his third World Cup triumph in a row, Chen also added artistic accents and made the freestyle the perfect whole. Hanyu’s lackluster final performance paved the way for his potential Japanese successor to win a silver medal. The 17-year-old Yuma Kagiyama stayed cool in the first big medal match of his life, took the chance and grabbed silver – with “only” one four-fold salchow and two four-fold toe loops.He wants to rehearse two further variants of the quadruple rotations by the Olympic winter. For him, however, that is not the ultimate: Instead of tackling the very difficult jumps with low accuracy, he would rather develop “a perfect, high-quality, stable program” for Beijing.

Lockdown extension according to Ludwig not fixed – Coronavirus Vienna

Merkel’s list: this is how the federal government assesses willingness to...

The latest on the corona crisis – Canton of Zurich tightened...