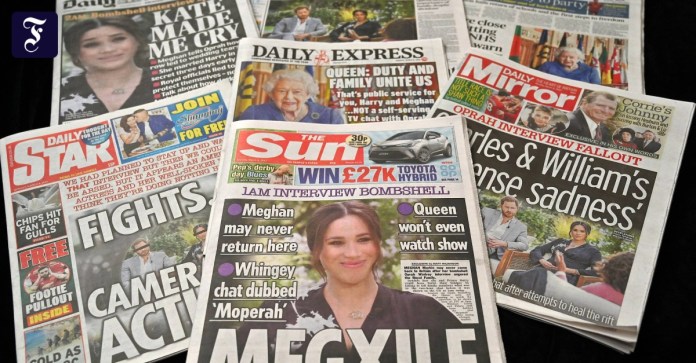 NSo everyone who is interested (and many others) has heard “Meghan’s” side of the story. Accordingly, the Duchess of Sussex and her husband, Prince Harry, fled from a royal family that leaves their married-in members out in the cold, ignores their calls for help and spreads the untruths about them.

The accusation that has provoked the greatest disbelief and, in part, naked horror, is that of racism. The word would be right in its place if it is true that “someone in the family” raised concerns about his son’s skin color in conversations with Harry.

What motivated Meghan to make this semi-anonymous accusation public, only she knows. She will have calculated the consequences not only for the family relationship, but for the reputation of the royals in the world.

The American celebrity interviewer who landed the scandalous conversation hurried after the broadcast to at least dispel the suspicion that her guests had spoken about the Queen or her husband Philip (who was in the hospital); Harry is said to have insisted on that.

But even so, in the words of a Conservative MP in the British Parliament, the Sussexes “detonated an atom bomb”. Overnight, a family soap opera has turned into a small state affair. Even Prime Minister Boris Johnson felt compelled to declare that “there is no place for racism in British society” – so not even in the ranks of the royal family. The Labor Party even asked Buckingham Palace to investigate the allegations against the host family.

So far only the internal complaints against the Duchess of Sussex have been investigated there, according to which she is said to have bullied and humiliated employees, especially female employees, during her time at Kensington Palace. In the next few days it will be seen whether the royals can stick to their traditional line of “never complain, never explain” (never complain, never explain).

Steffen Freund expresses himself racist about Harit and Bentaleb

Several security holes in popular Android sharing app – but no...

Wave of anger after the penalty for fraud in Russia has...

Helene Fischer: Florian Silbereisen talks about the downsides with ex