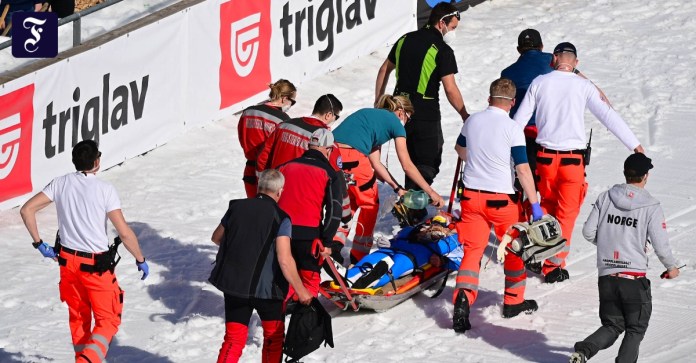 Karl Geiger was happy about his victory, but there was no big cheer. The spectacular sets from the giant hill in Planica and the wind turbulence were secondary one day after Daniel Andre Tande’s brutal fall. Good wishes for the Norwegian and the concern for his health shaped what happened at the ski jumping season finale on Friday.

The national coach of the Scandinavians, Alexander Stöckl, expressed the great hope that the 27-year-old will get away without permanent health damage. “The first tests did not reveal anything negative. They did a brain scan and checked the neck. There is nothing to report, that is very positive, ”said Stöckl of the German press agency. “According to the circumstances, he is doing well.”

In all probability, Tande will be brought out of the artificial coma on Saturday morning. Sports director Clas Brede Braathen announced this to Norwegian radio by SMS on Friday evening. The 27-year-old is in good hands in the Ljubljana hospital. “It looks like he’s gradually being awakened from his artificial coma in the early hours of the morning. Then I’ll be with him, ”wrote Braathen.

“The jump was sucked”

On the hill in the Slovenian winter sports stronghold, Geiger prevailed with a flight of 232 meters ahead of the Japanese Ryoyu Kobayashi and local hero Bor Pavlovcic. “The jump was really good,” said the 28-year-old violinist, reporting nervousness and a mishap before he pushed himself off the beam. “I broke the plastic buckle on the top of my shoe,” he explained. “The inspector gave me a metal ring from a car key and fortunately I was able to fix it with it.” Because of the strong gusts in some places, the competition turned out to be a tough affair and was canceled after only one round.

Stöckl had previously stated that Tande should initially be kept in an artificial coma. The 2018 world champion had been brought to a hospital in the Slovenian capital Ljubljana the day before after a violent impact in the trial run. Tande was intubated and mechanically ventilated after his fall. “Today we had the positive message that he has already started to breathe himself,” said Stöckl. His jumper has so far been diagnosed with a broken collarbone and a slight puncture of the lungs.

There had not been such a bad accident in the jumping or flight world cup in a long time. In the past few years, this spectacular sport had become safer, especially in the flight phase. “Such falls have become very rare – thank God,” said Germany’s team manager Horst Hüttel. “A residual risk can never be ruled out at 110 km / h in the air.” Seasoned Severin Freund said: “If it happens, it has an even bigger impact.” The Bavarian added: “Keep your fingers crossed for it turns out as good as it seems. “

Stöckl does not blame Tande’s horror fall on the external conditions, which were significantly better on Thursday than Geiger’s victory and eighth place for Markus Eisenbichler, or the jury. “We analyzed the video. It was his own mistake, ”said the 47-year-old. “He was too aggressive in the first flight phase,” added the Austrian and explained: “He got wide on his skis relatively quickly and then leaned a little on the air. Then he lost contact with the skis. You can’t really find anything there, except your own fault. “

Despite the shock in the Norwegian team, Tandes teammates started at the second World Cup in the valley of the hills. “I think that is also in the spirit of Daniel,” said Stoeckl.

The date is set, Lucy trailer and extensive OpenDev scenario

WM – Germany in front of the project