After her election to the head of the Bundestag of the Left, Susanne Hennig-Wellsow has now also resigned the chairmanship of the Thuringian parliamentary group. The group announced on Wednesday. Hennig-Wellsow had already given up the party leadership in Thuringia on Monday because of her move to Berlin. While their deputies in the party should initially continue to run the business, the faction says it wants to fill the post at the top with a new election in the near future.

The parliamentary manager of the Left, André Blechschmidt, praised Hennig-Wellsow “as an architect of the coalition of red-red-green in Thuringia”. The Left is the largest parliamentary group and, since 2014, has been the prime minister with Bodo Ramelow.

There is still no date for the election of the top parliamentary group. However, it should take place in the next few days, said a spokeswoman on request. Initially, the parliamentary group would be led by the two deputies Katja Mitteldorf and Roland Hande. A possible successor to Hennig-Wellsow as parliamentary group leader is the domestic politician Steffen Dittes, who is also the vice-party leader.

Hennig-Wellsow had announced that she would give up her offices as state and parliamentary group chairman in Thuringia when she was elected as federal chairman of the Left. She was elected to head the left together with Janine Wissler last Saturday. 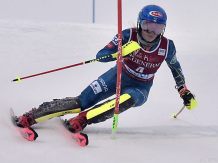 Shiffrin sees “whole season as a race to catch up” –...

Olympic base Saxony examines the dismissal of gymnastics trainer Frehse