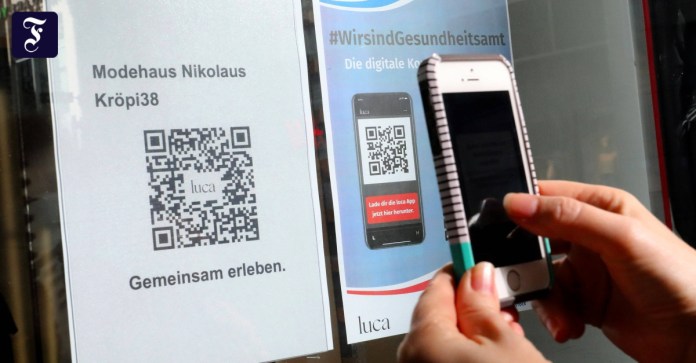 Dhe state government of Hesse introduces the Luca app. Patrick Burghardt (CDU), State Secretary in the Digital Ministry, announced on Friday that the software will be installed at the first six health authorities in Hessen from next week. In the next few weeks, it will be made available to all health authorities and the state examination and investigation office in the health sector. Retail and gastronomy can use the app free of charge. Burghardt reported on Friday that it would join the contract with the provider “culture4life”.

Other federal states also took part in the negotiations. The contracts for the use of the app should be concluded by the end of March. The Luca app is a central solution for the digital tracking of contacts and should work much better than the so-called Corona app. According to Burghardt, it should be a useful addition to the vaccination and test strategy in Hessen.

The purpose of the app is to largely replace error-prone and possibly incomplete paper lists and to document contacts. In the event of a proven corona infection, they can be transmitted in encrypted form to the responsible health department and read out directly. This means that contacts with infected people are identified in compliance with data protection regulations and chains of infection are broken.

“The Luca app supports our efforts to open the door in the future, for example in the retail sector as well as in the gastronomic and cultural sectors, and simplifies communication between health authorities and the operators and organizers,” says Burghardt. “With the app, chains of infection are detected more quickly, which offers the possibility of avoiding further lockdowns or closings.”

For example, the user registers when they go to a restaurant by scanning a QR code with their smartphone. When leaving the restaurant, the person checks out again. If a person infected with Corona was nearby at the same time, this information will be encrypted and transmitted to the responsible health department after approval. This in turn can anonymously inform all guests who were in the room at the same time.

Corona pandemic: The draft for the lockdown from Wednesday

Many people who want to be vaccinated in Klagenfurt and Villach

Survival success Rust will also appear on PlayStation 4 and Xbox...

Frankfurt am Main: Traffic jam on A 5 between Wetterau and...