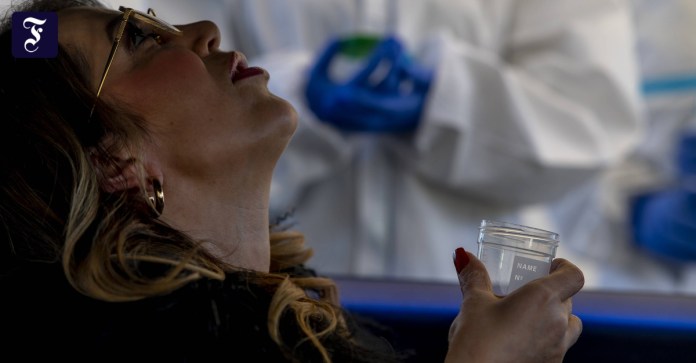 Dhe Hessian companies are calling for further easing after the federal government has corrected its course for Easter. “Admitting and correcting mistakes is professional, but that is not enough,” said Wolf Matthias Mang, President of the Association of Hessian Entrepreneurs’ Associations (VhU), on Wednesday. Other parts of the corona policy require a course correction. The federal and state governments would have to reopen shops, restaurants and hotels and stop talking badly about tourism and air traffic. “In the political balance, the concerns of social and economic life must be given a much greater weight,” said Mang in Frankfurt. Relaxations are responsible. “A combination of accelerated vaccination, testing, secure opening and digital proof of vaccination is now the way to go.”

Mostly unpleasant news about the infection process in Hesse came previously from the Robert Koch Institute. There are more new positive tests that came in overnight and the incidence has risen again, i.e. the new infections among 100,000 inhabitants recorded within a week. In addition, after a decline, there are suddenly more corona infections that have not been overcome.

As the Ministry of Social Affairs announced to the FAZ, Hessian clinics have recently cared for 1265 corona patients, including 229 suspected cases. 371 of them were therefore considered to be subject to ventilation and intensive monitoring. That is about as many as before in mid-February. A week ago it was 319 out of 1172 patients. This results in an increase of one sixth.

In Frankfurt, gurgle tests for Covid-19 have been offered since Wednesday, as reported by the dpa. According to the operator, the test center near the airport is the first of its kind in Hessen. It is designed as a drive-in, so test subjects can be examined directly in their own car. The procedure works without the often uncomfortable introduction of a test stick into the nose or throat. In addition to the PCR, the conventional rapid or antigen test is also possible by gargling.

Positive: The RKI reports only half as many more deaths in connection with the pandemic as a week ago. In addition, a circle has slipped below the incidence mark 100 and therefore only appears in light red on the institute’s corona map. In contrast, two are over 200. One of them closes all day care centers from Thursday and sends the children in grades one to six home.

After the data gap due to a software change, it is now clear: Hesse continues to rank above the level in the federal government in terms of vaccination quota after an intermediate spurt. This applies to both the first and second vaccinations.

Hessen wants to imitate a Tübingen model. If you can show a negative test, you have the opportunity to go to the theater for a day, for example. The aim is to clarify how a partial opening of public life in areas with low incidences in conjunction with a test regime affects the number of infections. Prime Minister Volker Bouffier (CDU) names Bad Homburg as one of the municipalities in question.

Djokovic continues to suffer – but his medical problems are causing...

Frankfurt am Main: Danger from unsecured accident site on A 5...

The market for carbon-ceramic brake discs for motor vehicles is flourishing...

Bares for Rares: Woman listens to offer for Disney picture –...

Long-term effects of Covid: a disease that often remains