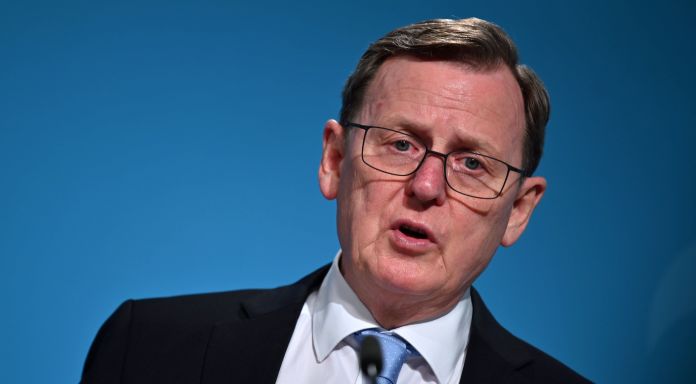 Berlin – If satire no longer caricatures politics, but describes it, then one can assume that some things are in disarray.

On Friday evening, Oliver Welke made fun of last week’s conference of prime ministers in the ZDF todays show. We remember that the meeting was interrupted for hours and finally ended in the early hours of the morning with the resolution of an “Easter rest”. However, this turned out to be impracticable two days later, which is why the Chancellor conceded the decision and apologized in all forms.

Somewhere between all these dramatic twists and turns, the morning magazine broadcast an interview with the Thuringian Prime Minister Bodo Ramelow (left). In it he explained that on the legendary night of the legendary MPK he stared at his screen in the State Chancellery for six hours and did not know where the Chancellor was – and when she would appear again. You have to know that most of the minister-presidents are connected to the federal-state summit by video in the Chancellery. So that there is not so much travel during these pandemic days. A few days later, almost everyone comes to the Federal Council in Berlin, but only marginally.

Oliver Welke quipped in his satirical show that Ramelow was probably bullied away at the conference, according to the motto: “Hey, we’ll meet in room B now, but don’t tell Bodo anything”. Please don’t laugh, but it was actually probably worse.

The MPK was interrupted for hours: at some point, Malu Dreyer called

In an interview, Ramelow told his colleagues about the world how things continued on the night of the record MPK: He was simply forgotten in the six hours. And not just him. “Armin Laschet, Peter Tschentscher, Volker Bouffier and Reiner Haseloff were also waiting in front of their cameras,” says Ramelow. “At 10.45 pm I got a first sign of life – from Malu Dreyer, who invited me to switch to the phone: I’ve been forgotten. The others probably too, even the CDU chairman, at least that’s how it seemed to me at this point.

Even today’s show would probably not have dared to invent it.

Ramelow then went on to say that he just looked at his screen for six hours and chatted with Haseloff: “… and he shows me the different backgrounds that he can choose from his video image. In the end he switched to a morning mood in Magdeburg, on which a piece of the Elbe could be seen. ”And at some point the break was over and the idea of ​​Easter rest was there. Probably the term alone was so tempting that no one disagreed.

There is now a lot of talk that the federal-state summit should start earlier so that it no longer ends at nighttime. That would of course be a step forward. Without ideas how the pandemic can be fought consistently, it will not work out either.

Hence a suggestion for kindness: How about a voluntary Easter rest? Everyone, politicians and citizens, withdraw as best they can. Because Ramelow said that too: “We politicians are also at the end of our nerves.”

Pocher publishes message from Wendler: “Even if you deleted it”