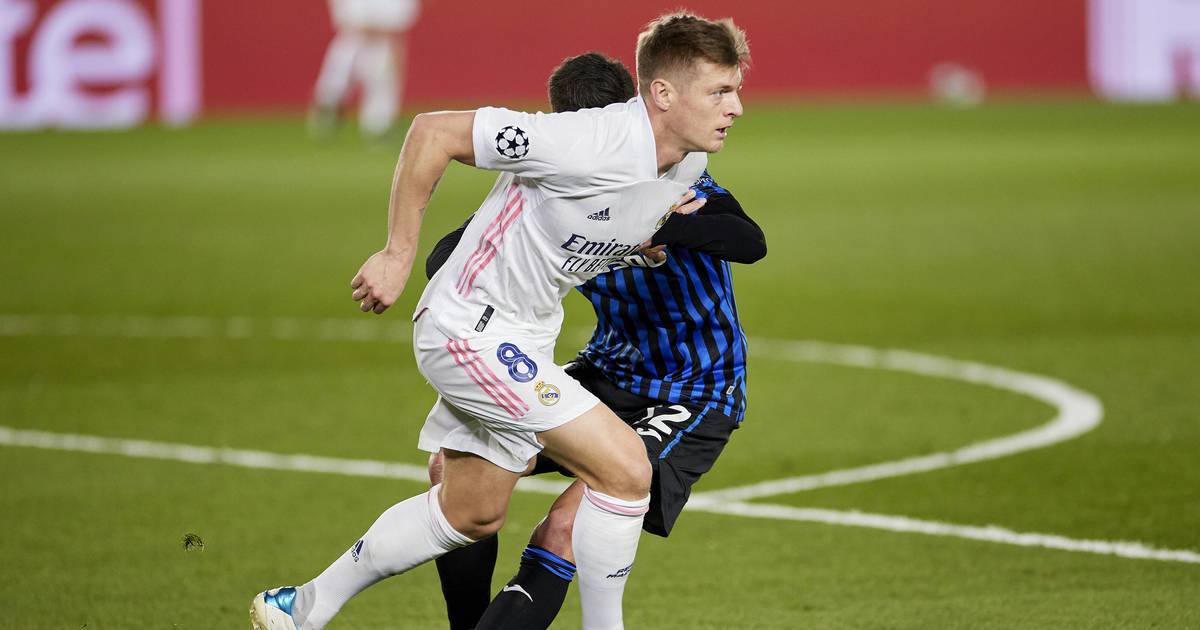 Real Madrid seems to be picking up speed in time for the season’s final spurt.

In the Champions League, Los Blancos made it through to the quarter-finals last week against Atalanta Bergamo, while coach Zinedine Zidane’s team has been undefeated in La Liga for eight games. The gap to league leaders and city rivals Atlético is only six points. (Table of La Liga)

Kroos is “the real brain”

One of the main reasons for the current upswing in Madrid is one who is often referred to as “the brain reals” in the Spanish press: Toni Kroos. Even when things weren’t always going well at Real in the first half of the season, the German midfielder was always reliable.

The 31-year-old impresses not only with consistency, resistance to pressing and excellent ball safety. Real’s midfield conductor, who had to pass the three upcoming German internationals with adductor problems, also knows how to shine on the offensive with decisive impulses.

In the 3-1 win on Saturday in Vigo, Kroos rose to the position of best assists in the “white ballet” with two assists (both times Karim Benzema scored). In La Liga too, Kroos is at the top of this statistic, no other player has made more than eight assists in Spain. (Results from la Liga)

And there could have been a few more this season. Because: According to statistics, Kroos is the player who creates the most goal chances in Spain’s upper house. After 28 match days, the Greifswald native has 62 initiated scoring opportunities – followed by Barca superstar Lionel Messi with 56.

That is why Kroos is indispensable for Zidane

The same applies to the Champions League. There, the former Bayern player also tops the list of players with the most created chances: 18 in number.

Kroos has only made eleven goals in 35 appearances this season. However, this value should not be due to himself and his production of opportunities.

The 2014 world champion plays the main role in Coach Zidane’s system and is an indispensable part of the team this season as well. An impressive 93.5 percent of passes also prove how reliably Kroos does his work in real midfield.

Zidane on Kroos: “One of the world’s best”

In contrast to captain Sergio Ramos, Kroos is not a loudspeaker on the field, his importance for the team is often underestimated in the Spanish public. But the German international shows in almost every game that he can steer this in a decisive direction.

His superior technique and the ability to read the game make the midfielder indispensable for the Madrilenians. That is why it is not uncommon for Kroos to receive praise from the top.

“He will be remembered as a spectacular player, as one of the world’s best in his position,” Zidane once ennobled his midfield engine in an interview Real France. “It’s impressive to see him train every day. This professionalism. When you talk about him, you think it’s about someone extraordinary.”

Since moving from FC Bayern to Real Madrid in the summer of 2014, Kroos has won the Champions League three times and the Spanish championship twice with Los Blancos. He will do everything in his power to ensure that at least one of the two titles is again this year.

Kroos has been presenting itself in the appropriate form for a long time. The hope remains that a two-week international break will be enough to heal his muscular complaints so that he can start the season’s final spurt fit.

ATX TR firmer at lunchtime, Mayr-Melnhof moves to the next all-time...

Big festival evenings in the 1990s