This Friday, Health Minister Jens Spahn (CDU) is not sitting on the podium at the federal press conference as many times before, primarily to clarify the corona situation. Today it is also about him personally and the government’s crisis management. The coalition partner SPD has long since shot at Spahn. For almost two weeks now, the negative comments have also been increasing in many other places. The support and acceptance of the population for the crisis management of the state is falling, Spahn’s popularity ratings are in the basement. So now the next pandemic phase will start on Monday.

The country is loosening up a bit. Flower and book shops, garden centers and cosmetic studios open. With the latter one should often have to have a test. The rest of the retail sector is also often hesitant to open up again, with restrictions to a few customers and, in some cases, by making appointments. For this purpose, tests are to be started across the board – will it work?

Spahn is accused by his critics of not having provided enough tests. Self-tests will now be offered first at Aldi on Saturday. Mecklenburg-Western Pomerania’s Prime Minister Manuela Schwesig (SPD) says in the “Spiegel”: “I have no understanding why the federal government has not ensured that we get the deliveries of self-tests for daycare centers and schools before Aldi is taken care of.” Baden-Württemberg’s Prime Minister Winfried Kretschmann (Greens) accuses the federal government of “serious failures”.

When testing – as with vaccination – speed and a wide range of use are required. The more contagious and, according to RKI boss Lothar Wieler, also more dangerous Corona variant B.1.1.7 is now gaining the upper hand in the country. The incidence is increasing despite lockdowns. As the virus spreads, it will become “even more difficult to keep the virus in check,” warns Wieler.

Spahn puts it this way: There is a framework agreement between the federal government and manufacturers for rapid tests for 50 million units per week for Germany. So far, federal states and municipalities have accessed around 10 million of them. The contract is intended to ensure that Germany gets enough of tests that are coveted around the world. There are also tests from an EU contingent. And there are also the self-tests for personal use – probably around 20 million pieces per week.

Will school principals wait for tests to be taken?

From Monday, the rapid tests – with trained staff and cotton swabs deep in the mouth and nose – should be free of charge in pharmacies, test centers and practices. This is the starting day for the federal government to assume the costs. But in many countries the tests are not immediately available. How long are the lines in front of pharmacies? Will school principals wait for tests to be taken?

“We are world champions in logistics,” says Spahn. “If a country says we have 1000 schools, (…), please deliver so and so many self-tests to each school in the next three weeks, then every German logistician and manufacturer can do it together.”

And then? Once there are enough tests? How exactly this should work is not stated in any of the government’s resolutions.

For example, there is the question of whether the test results will be recorded digitally. After all, there should only be one or two rapid tests per week at state expense. “We should be positive together, what pragmatic, creative, agile, innovative things have long been made on site,” says Spahn. “There’s everything. Most test center providers that I experience have the digital option of documenting the test results.”

Again and again the minister tries to counter the accusation of failure in administration and politics. A test as an entry condition for eating out, for example – how is that supposed to work?

Can the third wave really still be avoided?

“It will be like that at some point,” says Spahn, “that there is a place in front of the restaurant before you go to a restaurant.” Then, for example, the five people registered for table 15 at 7.15 p.m. would come. “Maybe there is a small tent set up outside,” said Spahn. The people there might do the self-test over a small drink, but under supervision. “It doesn’t all have to be regulated by the federal government, not even by the federal states in detail.”

It may be that Spahn wants to sound easy right now – in view of the bad mood that is reflected in the statements of many people in Germany about government policy at the moment. In view of the reluctance to lockdown documented in surveys, how do optimistic scenarios fit in with the gloomy Corona forecasts?

A model by scientists from the TU Berlin shows: A third wave would probably have been unavoidable even if the previous measures had been retained. The team around mobility researcher Kai Nagel now finds rapid tests to be correct. But the researchers already stated after the federal-state resolutions on Wednesday evening: One test per week might not be enough. Testing twice a week – that should be the motto.

Consultation between the Chancellor and the private sector was canceled

It would also be important for the companies to offer tests for their employees in the factories. A consultation with Chancellor Angela Merkel (CDU) with the economy was canceled on Friday. The business associations had sent dozens of questions to the government. “Will the companies’ procurement and implementation costs be refinanced?” They wanted to know. And whether there is a possibility of reimbursement, whether the companies should procure and pay for the tests themselves, and whether there are “initial training concepts in coordination with science and educational institutions”. When doing tests like this, the most important thing is to be able to put cotton swabs in the throat and nose properly. From government circles it was said in the afternoon that the government was dissatisfied with the previous proposals of the economy.

Politicians absolutely want to avoid conditions like a year ago with the masks, which were rare at the time. Spahn is still concerned with the turbulent procurement under high pressure by his department at the time – especially the fact that the logistics company Fiege, who comes from Spahn’s Westphalian homeland, received a large order for the transport from China, storage and distribution. “Zeit” now reports that the ministry has definitely not made any other offers, but has only spoken to others. Now the Federal Audit Office is examining the case. (dpa / fra)

Corona vaccine: A vaccine could increase the risk of AIDS

Corona: Only Covid cases in the Basedow Clinic Merseburg – clinics... 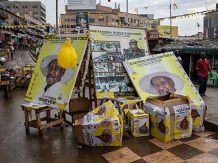 Germany before lockdown extension, record in the USA