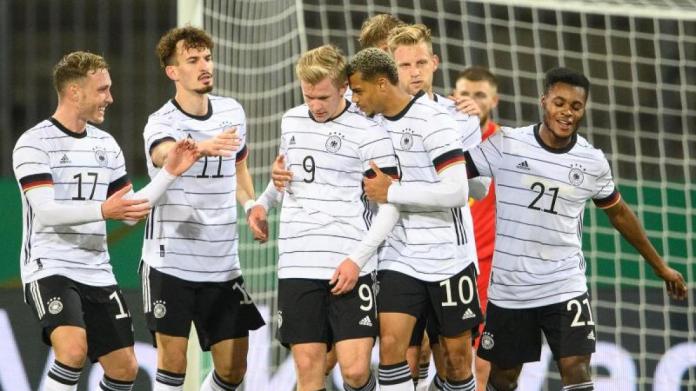 Hungary – Germany live on free TV and stream: The two teams will meet today on March 24th, 21st in the group stage of the 2021 U21 European Football Championship. We have all information about the transfer for you here.

Hungary against Germany live in TV and Stream: In the group stage of the U21 European Championship today, Wednesday, March 24th, 2021, the two teams will play against each other.

Originally, the U21 European Championship, which will take place in Hungary and Slovenia in 2021, was supposed to be carried out in one go. Due to the ongoing corona pandemic, however, this is not feasible, which is why the game plan has been divided. Accordingly, the group stage games will now be played in March and the finals will finally take place in May and June.

Where can you watch the game between Hungary and Germany live on TV and stream? Will the game also be shown on free TV? Is there a free stream? The answers and all information about the broadcast of the group stage of the 2021 European Under-21 Football Championship can be found in this article.

Hungary – Germany live on free TV and stream: The U21 European Championship will be broadcast today on March 24th, 21st

When to play Hungary in the U21 European Championship against Germany? Here in this overview you will find all information at a glance:

Broadcast of the U21 European Championship 2021 on free TV: Which games are available for free on TV and stream?

The duels of the U21 European Championship 2021 with German participation will be from the broadcaster ProSieben shown on free TV under the football brand “ran”. Sports presenter Christian Düren arranges the game on the pitch together with expert and ex-national goalkeeper René Adler. Matthias Stach also works as a commentator during the games.

In addition, 45 minutes before the start of the Germany Games, viewers can expect a corresponding lead-up with expert discussions and interviews live from the stadium. Before the game against Hungary, the Hungarian cult goalkeeper Gábor Király will be a guest on the show as a conversation partner.

All games of the U21 European Championship without German participation can be viewed live on free TV ProSieben Maxx or as a free stream ran.de track: straight to the side.

The coach of the U21 national team is 58-year-old Stefan Kuntz, who has been looking after the team since August 2016 and therefore has a lot of experience with these tournaments. The German team’s path to the U21 European Championship in 2021 therefore went without any major problems.

Subsequently, however, a consistently positive trend could be observed, because Stefan Kuntz’s team won the other four games confidently and thus managed to qualify as group winners with five points ahead of Belgium for the U21 European football championship. In total, the team scored 22 goals in the eight qualifying round games.

Great interest in tests before Christmas

Because of the new coronavirus variant: Germany is also considering a...

Perhaps the most interesting was Doom, a goddamn shooter I just...