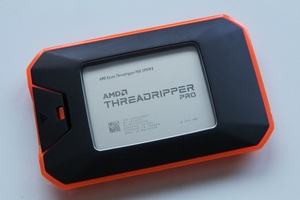 Two high-end components reached us before the weekend and since each is a special piece of hardware, we want to introduce them to you before we start the test.

If it’s just about computing power, a Ryzen Threadripper 3990X will be superior to the 3995WX with its faster cores. However, where a certain memory bandwidth is required per core, the Pro models should score. This will be a focus of the test. Where can the Pro models show their advantages and where does the memory interface play no role? However, as I said, you should also have the maximum memory expansion in mind, which is eight times as high as the standard models at 2 TB.

The Ryzen Threadripper Pro processors are operated on motherboards with the WRX80 chipset. In addition to the ASUS Pro WS WRX80E-SAGE SE WIFI, there is also the Gigabyte WRX80 SUB8 IPMI and a Supermicro M12SWA-TF. The motherboard from ASUS is not yet available, but it should come on the market in the first quarter and cost 868 euros.

The upper half of the main board is dominated by the base SP3. Below and above there are four DIMM slots that can each accommodate one UDIMM, RDIMM and LRDIMM in the form of DDR4-3200. Each DIMM slot is connected to a memory channel in the processor.

The power supply for the mainboard is located on the left and right of the base. The TDP of the Ryzen Threadripper Pro processors is up to 280 W. Unlike the ROG Dominus Extreme, ASUS only uses a 24-pin power supply connector. There are also three EPS.

When it comes to the expansion slots, the seven x16 slots are certainly eye-catching, all of which should have 16 PCI Express lanes – the Ryzen Threadripper Pro processors theoretically provide enough lanes. Two M.2 connections are connected directly to the processor, and another via the chipset. There are also two SFF-8643 connections, which are also connected via PCI Express and which can be used for U.2 SSDs, for example. There are also eight SATA connections.

On the I / O panel, the mainboard offers 9x USB 3.2 Gen 2 and 1x USB 3.2 Gen 2×2. An Intel X550-AT2 provides two 10GbE ports. There are also analog and digital audio connections and antennas for the WLAN. In addition, the ASUS Pro WS WRX80E-SAGE SE WIFI offers a micro SD card slot, a BMC chip and can be controlled remotely via IPMI.

ASUS uses numerous covers for cooling. A fan can be seen under the chipset cover. However, it cannot (yet) be said whether this is also installed in the VRMs. The form factor is EEB (Extended ATX). Sufficient space should therefore be available in the housing if such a mainboard is to be installed.

A question of cooling

As far as cooling is concerned, the Ryzen Threadripper Pro 3995WX comes with an official thermal design power of 280 W. On the one hand, we have the option of using a Noctua NH-U14S TR4-SP3. As an air cooler, this is quite easy to handle in terms of installation and operation and should offer sufficient cooling capacity. 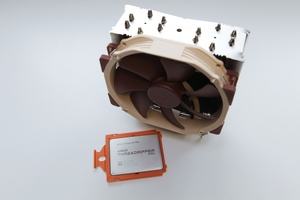 We also have the option of using an Alphacool Eisblock XPX Aurora PRO. As a water cooler, which also covers the entire heat spreader of the Ryzen Threadripper processor, it should be a good alternative, but requires the construction and use of a water cooling circuit.

We are currently waiting for the right RAM. It should be DDR4-3200 with ECC to meet the workstation requirements of the remaining components. We hope to have everything together in the coming week to start with the benchmarks. 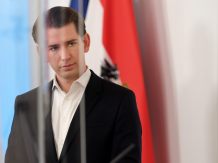 70 years ago another nuncio came to Germany | DOMRADIO.DE