A seven-day incidence of less than 50 has long been the goal of the federal and state governments. The value was almost reached in mid-February and has been rising steeply since then.

The seven-day incidence in Germany has risen to 135.2. That comes from figures from the Robert Koch Institute (RKI) from Tuesday morning. The day before, the RKI had reported 134.4 new infections per 100,000 inhabitants per week. The values ​​were last similarly high in mid-January.

The data reflect the status of the RKI dashboard from 8 a.m., subsequent changes or additions to the RKI are possible. After the number of new infections fell significantly in the lockdown by mid-February, the number of infections recently rose sharply again at the beginning of the third wave – which experts also attribute to the widespread use of more contagious variants.

In the federal states, only two had an incidence of less than 100. In Saarland, which is still planning a large-scale opening with tests after Easter as part of a model project, according to RKI data from Tuesday morning it is 75.7, in Schleswig-Holstein 69.7. The RKI calculated the highest value for Thringen (237.6), followed by Saxony (193.4) ​​and Saxony-Anhalt (168.1).

The health departments in Germany reported 9549 new corona infections to the RKI within one day. According to the RKI from Baden-Wrttemberg, not all cases were transmitted due to technical problems.

In addition, 180 new deaths were recorded within 24 hours. That comes from the numbers of the RKI from Tuesday. Exactly one week ago, the RKI had recorded 7,485 new infections and 250 new deaths within one day. The RKI has counted 2,791,822 detected infections with Sars-CoV-2 in Germany since the beginning of the pandemic. The actual total number should be significantly higher, since many infections are not recognized. The RKI stated the number of those who had recovered at around 2,507,900. The total number of people who died with or with a proven infection with Sars-CoV-2 rose to 76,093.

According to the RKI management report from Monday evening, the nationwide seven-day R-value was 1.10 (previous day: 1.17). This means that 100 infected people theoretically infect 110 more people. The value represents the occurrence of the infection 8 to 16 days ago. If it is below 1 for a longer period of time, the infection rate subsides; if it is consistently higher, the number of cases increases.

Big fire in Arpsdorf: fire broke out on farm | ...

For years there has been trouble in Berlin-Reinickendorf: This lake is...

Xiaomi shows a smartphone with a display that is bent four...

Peter Alexander – the dream son-in-law as a cherry thief –... 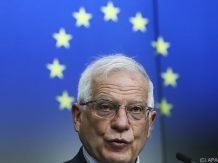 “Shut up”: Hoermanseder after Klum show on the ground – People

Valtteri Bottas: “It’s best not to read anything” / Formula 1