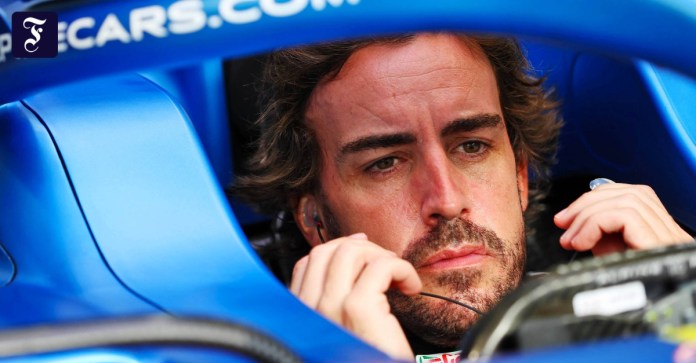 Dhe French car company Renault is starting the new Formula 1 season under the name Alpine. The team’s performance draws its special flavor from its driver Fernando Alonso. The two-time world champion was not in Formula 1 for two years, now he is returning to Renault after stints at Ferrari and McLaren. And with his 39 years in the cockpit he will meet the 24-year-old Frenchman Esteban Ocon.

“I see it as a great opportunity to be in a team with Fernando Alonso. Everyone keeps asking him his age. I think he looks 28, he hasn’t aged at all. He will be there from the very first moment, it will be a close race, ”said Ocon from Bahrain in a discussion with FAZ Alonso, more reserved and less smiling than his team-mate, but the compliment doesn’t stand. “I’m 39 and I feel like 39. I feel mature and yet I am physically fit,” he says. For him, the question was more whether he could keep up mentally. “Formula 1 binds you completely throughout the season. You have to be ready to give up everything else during this time. You see it a little differently in old age than when you are young ”.

He knows, says Alonso, “that my age is a top issue, but I’m tackling the challenge with all my might. I’m ready. ”The fact that a young, wild group and above all a particularly ambitious Max Verstappen are part of the Red Bull doesn’t bother the old master:“ There’s a new generation coming, yes, but so far they have nothing won yet ”. As well as? Lewis Hamilton has dominated the Mercedes for the past few years and most believe this will be the case again this year. “Mercedes will be very strong again,” says Alonso. “Lewis is the favorite,” says Ocon.

With Alpine, the two want to drive in the front midfield, knowing full well that there will be little to gain in this transition year, without any major changes to the car. But the standard remains high. “We want to get the most out of it. If our car is technically good for seventh place, then I want to finish sixth, ”says Ocon. “I expect a team that wants to get a little better every day,” says Alonso. “Hopefully we can get on the podium a few times”. Compared to the racing cars he drove before his break, Alonso feels “more power, sharper brakes, more grip, impressive speed on the straights”. The additional electrical power is better integrated into the drive train, “everything feels more precise”.

Alonso explains why he is driving in Formula 1 again at all with his passion for challenges. He was able to drive the Dakar Rally again or the Indy 500, but “then I sat at the table at home and asked myself: What is the biggest challenge?” Nothing seemed more difficult and attractive to him than returning to Formula 1. There he is in a hurry a reputation for being an exhausting teammate. “I’m laughing at that”, says the Spaniard, “whoever says something like that doesn’t know me”. After all, it is no coincidence that he is now behind the wheel for Renault for the third time. “They would hardly call me again if they weren’t happy with me”. He immediately gave his new team-mate Ocon a go-kart, “with which he’s now racing around between the races”.

Let’s see if the fresh friendship lasts when it comes to centimeters wheel to wheel in the championship. Basically, the teammate is the first opponent. The young Ocon also has his confidence. “I will learn a lot from Fernando, but he can also learn from me. And one day I want to be world champion, that’s why I’m competing ”. As a Frenchman on a French team, that would of course be too good to be true for him.

FAQ: Who shouldn’t be vaccinated against Corona? – MDR

Unrest at the WAC: trio removed from the cup squad

Svetlana Tichanovskaya on protests in Belarus: “At the moment we seem...

Where the wild Vikings live

Johnny Rotten is annoyed by the planned Sex Pistols series

Tightening for the ski areas due to traffic jams in front...