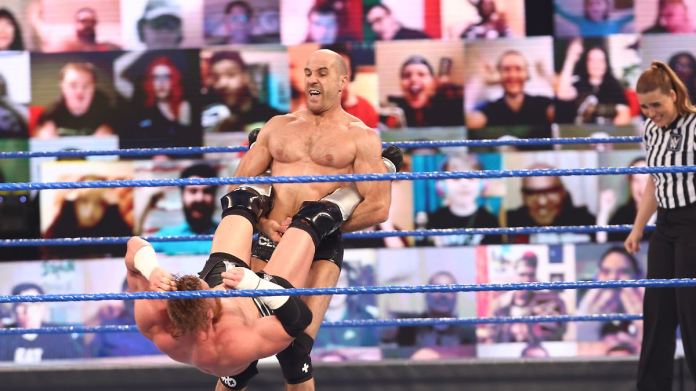 The Swiss wrestler Claudio Castagnoli has performed as Cesaro every week for almost ten years in front of a large live audience at World Wrestling Entertainment (WWE). Due to the pandemic, the arenas are only filled with virtual fans. That will change for Wrestlemania 37 (on April 10th and 11th) – 25,000 spectators are expected to sit in the audience at the event in Florida. In an interview with ntv.de, the 40-year-old explains what he expects from the biggest wrestling event of the year, how he experienced the corona pandemic in his job and why coffee plays an important role in his life.

ntv.de: You have been active in the WWE for almost ten years now, and have already won the US title and the tag team belt several times. But you only made your big breakthrough a few months ago. Since then, you’ve had matches with the biggest names in WWE, like Seth Rollins. Why did it take so long?

Cesaro: I think it takes a little longer for certain people. There are wrestlers who are just coming in and who are instantly thrown into the top feuds and top positions. Sometimes it works. Sometimes it doesn’t, you’ve seen that in the past. It was a long way for me and I prefer it so much – start at the bottom and then work your way up. I am very happy that I have arrived there now.

In your job as a wrestler, do you feel that your performance is at its peak at the moment?

Yes, definitely. If you asked me a year from now, I might say: No, not then, now I am. I had a few feuds with Seth Rollins when I was still tagging with Sheamus, but because we’ve all developed so much, it feels new again now. The same goes for wrestlers like Jay Uso or Apollo Crews. We have all wrestled against each other many times, but are now at a new stage in our careers. And that’s incredibly exciting at WWE right now, seeing how many people are finding themselves right now.

And all of this under difficult conditions. Keeping your distance is not possible in wrestling. Nevertheless, WWE was one of the first sports brand to resume operations during the corona pandemic. How did you experience the isolation in the bubble?

The WWE always says: The Show Must Go On! I think we even had no real interruption from Corona and immediately found a way how we can continue to entertain people – all in a smaller space with fewer people. A major rethink has taken place. We were also the first to have virtual fans on this scale with the Thunderdome at the shows. In terms of technology, it’s unbelievable. Every time I go out I think it looks like the future. For us as performers, there has also been a rethink. What works and what doesn’t. How do we make it interesting for the people who are really just at home. For me it was important to find a way to address people and offer entertainment so that they can forget everyday life a little.

You were born in Switzerland and wrestling events are now global events. To what extent are you confronted with Corona every day outside of work?

I naturally speak to my friends and family. I have a lot of friends in Germany, England, Switzerland – and all over the world. Switzerland is taking a different path than Germany in the corona pandemic. Sweden and Austria also do it a little differently. America is trying something else. It’s just like this: nobody has the perfect solution, everyone is just trying to do the best they can. That is my feeling. That’s how I try to do it too. My job is to stay healthy, stay home, and keep people entertained. If I have to stay at home more often now, then I can’t complain, after all, I’ve only been on the road for the last nine and a half years. I just try to see the positive in it.

Do you miss traveling, including the European tours with the WWE?

Yes one hundred percent. I really miss the European tours because it was always something special for me – to come home. Wrestling live in front of fans in Germany, Austria and Switzerland and also worldwide, that makes the WWE so special that we are practically close enough to touch.

Now Wrestlemania is just around the corner. At the largest WWE event of the year, the Tampa Bay Buccaneers stadium is said to have 25,000 people in the stadium on the two days. What do you expect with this fan comeback?

I think this is going to be an emotional explosion. Regardless of how many there will be – you saw that at the Super Bowl. I’ve heard a little about what measures are being taken so that the fans can be there. These are huge logistical apparatuses behind it. It’s funny. We talk about it backstage: Everyone wants to be in the first match that takes place in front of an audience again. The anticipation is huge.

The corona pandemic is not over yet. Is it a trade-off between risk and benefit to say that we are bringing thousands of people together again in one place? Or do you have to go back to your old routines at some point?

It’s a bit of both. They say: yes, we must slowly march forward again. But at the same time take into account the given templates. I am not an expert who can say what one should or should do. But I know that at WWE we have our own team that checks the medical field to see who can buy tickets at all. But I think nothing is done that could be a step back.

In a way, you already had the often mentioned “Wrestlemania Moment” when you won the first “Andre The Giant Memorial Trophy” in 2014. If you could imagine what would your Wrestlemania Moment be like this year?

The longest Cesaro swing in history followed by a sharp shooter (laughs)! Best against Seth Rollins.

Many wrestlers let off steam with gaming formats on YouTube. You are partly active there, but you also have another passion. You have launched your own type of coffee. Are you already planning a barista career after wrestling?

As a barista, I practice at home every morning (laughs). I love coffee and it’s something that has brought me closer to people. I follow a relatively strict diet and a certain routine – a large breakfast, exercise and then a coffee. When we were still traveling a lot, we always looked on Google for small coffee shops. Wherever we were, we drank coffee, chatted and that’s how you get to know the people and the city. It’s the look behind the scenes, away from the airport, hotel and arena. Now that we can’t travel anymore, I figured I’d try to bring out a variety for people myself. It’s fun and the response has been very positive. Maybe there will soon be Nespresso capsules with the Cesaro logo on them. That would be something.

Bundestag: GroKo in the Bundestag shies away from more control

Bob Brett dies: he made Boris Becker number one

Michael Kretschmer: Saxony will go into hard lockdown from Monday

Date for school opening in Austria still not fixed – politics U Committee: The timetable for 2021 – Vienna updates