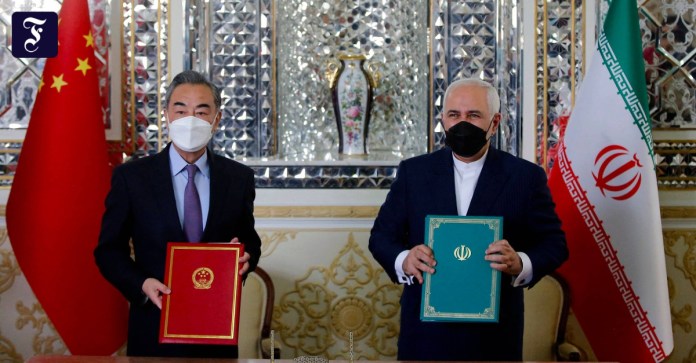 Iran and China have signed a 25-year cooperation agreement. “Our relations with Iran are not influenced by the current situation, but are permanent and strategic,” Iranian news agencies quoted Chinese Foreign Minister Wang Yi on Saturday. In contrast to other states, Iran changes its relations with other countries “not with a phone call”. A spokesman for the Iranian Foreign Ministry called the document a plan for trade, business and transport cooperation “with a special focus on the private sector of both sides”.

The signing of the comprehensive cooperation agreement by Iran’s Foreign Minister Mohammad Jawad Zarif and his Chinese colleague Wang Yi took place in Tehran on Saturday afternoon. Wang arrived in the Iranian capital on Friday.

Controversy in the Iranian Parliament

Tehran believes that the agreement could “very effectively contribute to deepening Sino-Iranian relations,” said Iranian Foreign Ministry spokesman Said Chatibzadeh on state television. The spokesman recalled the visit of Chinese President Xi Jinping to Tehran five years ago, during which the foundation stone for the comprehensive cooperation agreement was laid.

At that time, Xi and his Iranian colleague Hassan Rohani decided to strengthen bilateral relations between their countries and agreed, among other things, to intensify cooperation in the areas of transport, ports, energy, industry and services. The spiritual leader of Iran, Ayatollah Ali Khamenei, described the cooperation with China as “right and sensible” at the time.

Last year, however, the planned cooperation sparked controversy in the Iranian parliament after former President Mahmoud Ahmadinejad accused the government of negotiating a “new 25-year agreement with a foreign country” without informing the Iranian people .

Many MPs reacted angrily to a speech by Zarif in parliament in July. The Foreign Minister tried to appease the parliamentarians by assuring that the proposed cooperation agreement contained “no secret” agreements and that the public would be informed of its exact content once the negotiations were concluded. Despite this promise, only a few details from the agreement have so far been communicated.

For China, the agreement with Tehran is part of its ambitious “One Belt, One Road” initiative, which ties in with the historic trade routes of the Silk Road. China is already Iran’s most important trading partner. Before the United States, under then-President Donald Trump, unilaterally withdrew from the international nuclear deal with Iran in 2018 and imposed new sanctions on the country, China was the world’s largest buyer of Iranian oil.

Wang’s visit to Tehran came a few days after receiving his Russian colleague Sergei Lavrov in the southern Chinese city of Guilin. Russian relations with Washington are also extremely tense at the moment; in an extremely rare move last week, the Kremlin summoned its ambassador to the United States back to Moscow for consultations in the dispute over statements by the new American President Joe Biden.

Like China, Russia is also a party to the international nuclear agreement with Tehran. Both countries had condemned America’s withdrawal from the agreement and the new sanctions against Iran.

Biden has announced his willingness to bring the United States back into the nuclear deal. The Democrat also takes a tough stance towards China. Biden said he personally told President Xi that Washington did not want a “confrontation” with Beijing. “But we know that there will be deep, deep competition.”

Dispute between US economists Larry Summers and Paul Krugman: The Two...

Party convention of the Greens in Berlin: Bettina Jarasch has now...