For China, the agreement with Tehran is part of its ambitious One Belt, One Road initiative, which ties in with the historic trade routes of the Silk Road. China is already Iran’s most important trading partner.

Before the US unilaterally withdrew from the international nuclear agreement with Iran under then-President Donald Trump in 2018 and imposed new sanctions on the country, China was the world’s largest buyer of Iranian oil. In 2016, the government in Beijing promised to increase bilateral trade more than tenfold to $ 600 billion over ten years.

Due to the sanctions imposed by the USA, among other things, Iran is in an acute economic crisis that has been exacerbated by the corona pandemic. Since the new US President Joe Biden does not want to lift the sanctions in the short term, the government is orienting itself more towards China and Russia.

Season 5 introduced with a new quest and bounty system; ...

Just before the wedding, the bride finds out who he really... 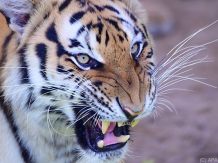 Tiger bit woman’s hand when trying to stroke her in the...