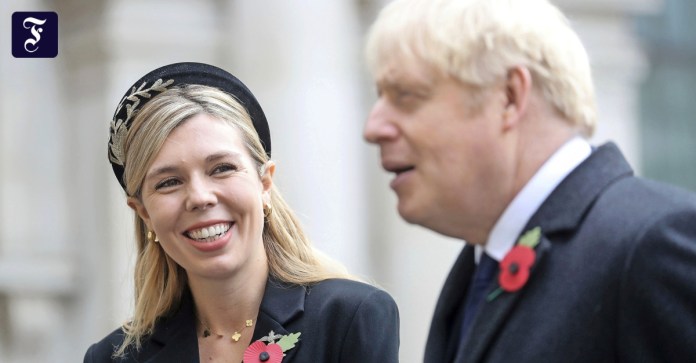 When Carrie Symonds walks into her home at 10 Downing Street, she no longer has to look at faces that she displeases. Boris Johnson, the roommate, fired these people. When she then climbs the stairs and unlocks the private apartment that extends over number 11, the legacy of the previous tenant no longer plagues her. Symonds has cleaned up Theresa May’s “John Lewis furnishing nightmare” (John Lewis is Britain’s largest department store) and had everything renovated exquisitely. In a nutshell, Symonds’ previous work at the British seat of government could be summed up in one sentence: First she replaced the staff, then the furniture. What, one might ask, is next?

Symonds already holds a special place among the first ladies in the United Kingdom. She is the first to move into the official apartment without a marriage certificate. That is still missing today, because a wedding, Johnson recently muttered, would only be considered for Carrie if it could be celebrated appropriately. So pompous. So after Corona. Compared to its predecessors, Symonds is one thing above all else: more. She is (even) more ambitious than Cherie Blair, (even) more activist than Sarah Brown and (even) posher than Samantha Cameron. You don’t want to mention them in the same breath as the inconspicuous first gentleman Philip May.

The renovation thing is the latest mini scandal. The London society magazine “Tatler” just brought to light that Symonds had taken a hefty amount of money into the redesign of the apartment, among other things, to be able to pay for the fabrics and wallpapers of the champagne-ecologists popular designer Lulu Lytle. At the same time, the Daily Mail revealed that Symonds was looking for ways to get the money back. In doing so, she developed the smart idea of ​​using her experience as a charity organizer and setting up a “Downing Street Foundation”. The government does not want to comment on this, but neither does it want to deny it. The Daily Mail even knows that Johnson has his eye on the extremely wealthy Lord Brownlow as the head of the foundation.

Of course, that doesn’t go down well with everyone. The Guardian asked Alistair Graham, who had once headed the Committee for Standards in Public Life, how such a move should be assessed. “I would be surprised if it were right to found a charity and receive tax benefits for the apartment of a public servant,” said the latter – and added: “Monstrous!” A Labor MP spoke of “waste, budding and filth” on Downing Street. Johnson and his fiancée couldn’t be further removed from the concerns of the corona-plagued population. Symonds must feel pretty misunderstood about that. After all, she wants to include the meeting rooms of the historic official headquarters in the initiative and thus make them a listed building.

Is defamation involved again? Is there an honorable venture by an art historian who has at least a degree in art history, just because the woman does not suit many? Symonds offends, that much is certain, in almost every conceivable camp. They can’t stand leftists because they chose Boris Johnson; But they also like the fact that Symonds is committed to the climate, rare animals and the oceans. This is exactly what annoys some on the other side of the political spectrum, but who otherwise appreciate the flamboyant, ladylike style of the former Tory head of communications. EU haters consider Symonds too little “brexity”, and feminists are thorn in the side that they act in the protective shadow of a (24 years) older man.

EU wants to punish Turkey in the gas dispute

Many complaints about Klarna payment service

Miners send signs of life after seven days in mine

Drone crashes into the bell tower of the Berlin Memorial Church

Chauffeurs sound the hygiene alarm because the toilets are closed