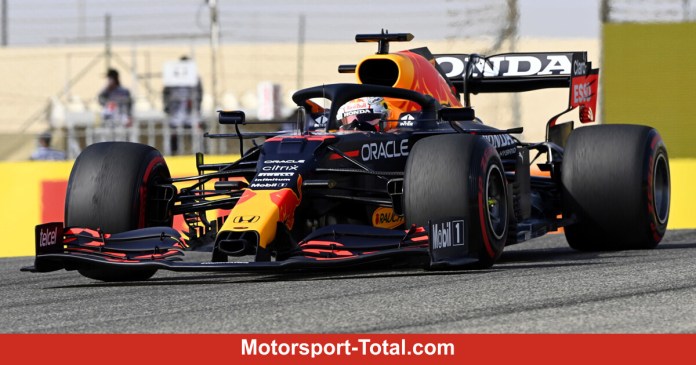 (Motorsport-Total.com) – Max Verstappen has set a big exclamation mark with an impressive best time in the third free practice for the Grand Prix of Bahrain (Formula 1 2021 live in the ticker!). The Red Bull driver was stopped on his fastest lap in 1: 30.577 minutes and left his supposedly fiercest rival, Mercedes superstar Lewis Hamilton, by 0.739 seconds.

And not because of a mistake by Hamilton. The Red Bull is lying “really well,” analyzes ‘Sky’ expert Jenson Button, “is the best car over the curbs, has good traction and only sometimes a little oversteer. So he can accelerate early and enjoy the power of the Honda. Motor off. “

Mercedes have “something else up their sleeve. I’m sure they’ll grow,” says Button. “But with Max every lap looks so controlled, and that’s not easy in such windy conditions.” Especially since Sergio Perez is also reasonably competitive: P5, 1.331 seconds behind his team-mate, but only 0.053 seconds behind Valtteri Bottas (4th / Mercedes).

The big surprise was – that had already become apparent – AlphaTauri. Spearhead Pierre Gasly was a second behind Verstappen, but beat both Mercedes and Red Bull number 2 drivers and finished in third place. Yuki Tsunoda couldn’t quite keep up with that. The Japanese finished 13th, 2.132 seconds back.

At Ferrari, Carlos Sainz has so far been faster than Charles Leclerc. That was also the case in the final training. The Spaniard finished sixth, 1.531 seconds behind, 0.374 seconds ahead of his teammate (11th). For his part, he complained after a spin in Turn 2: “I have unbelievably little grip. The car is extremely difficult to drive.”

The session began at 3:00 p.m. local time in the Sachir Desert at a scorching 39 degrees Celsius, which meant that there was hardly any traffic for the first few minutes. Background: Qualifying in the evening will take place under floodlights, and noticeably lower temperatures are expected there. In this respect, there was very little to learn for drivers and teams.

Accordingly, one should be careful when classifying the lap times. Sebastian Vettel, for example, had not completed ten laps after 40 minutes. “We can only test a few parts,” says team boss Otmar Szafnauer. “Not necessarily for this weekend, but for later in the season, when we might experience temperatures like this again.”

Vettel: A moment of shock with a blow on the helmet

For Vettel, the training did not go as desired. Even if the lap times were not in the foreground: 14th place (15 laps at the end) does not make him a favorite for a top 6 starting position. And in between, a part also flew away from his front wing, which then hit him on the helmet. Fortunately, the situation remained without any significant consequences.

Mick Schumacher landed in 18th place, but fulfilled his target again with a margin of 0.200 seconds over teammate Nikita Masepin. All in all, of course, he’s in a lost position: “The Haas generally looks pretty difficult to drive. It’s very restless. Not an easy car,” analyzes ServusTV expert Nico Hülkenberg.

Send note: Because RTL no longer broadcasts Formula 1, the first qualifying of the Formula 1 season 2021 will not be shown on German free TV, but only on the pay-TV provider Sky. The session begins at 6:00 p.m. German time. (AD: Get the complete Formula 1 and the best live sport with Sky Q or stream flexibly with Sky Ticket. Without a receiver.)

(More reactions to the session can be found in the ticker “Paddock live” with Ruben Zimmermann!)

Corona crisis in Berlin and the region: Brandenburg initially vaccinates with...