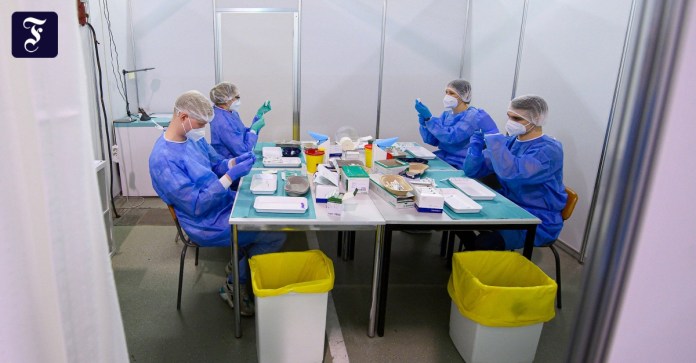 IIs the corona vaccine unevenly distributed in the European Union? Austria’s Federal Chancellor Sebastian Kurz has met with irritated reactions in most EU capitals with this thesis. He could only be surprised at the discussion, said the German Minister of State for Europe Michael Roth (SPD) this week. An EU diplomat added that nobody needed the conflict that Kurz conjured up.

Since just ten days ago, complaining about the alleged “bazaar” in the vaccine distribution, he has been employing the Brussels officials and the EU ambassadors. In permanent talks, they try to keep the dispute away from the virtual EU summit on Thursday and Friday and to reach a compromise. “It would be a nightmare if the heads of state and government had to argue about vaccination doses in their video conference. You have more important things to do, ”said an EU diplomat. In Brussels it was said on Wednesday that Council President Charles Michel was not inclined to allow the subject to be discussed either. Kurz could put his opinion on the record, but nothing more. In any case, the Chancellor has already achieved what he wanted to achieve: attention.

Kurz’s finding of unequal distribution is due to the fact that not all Member States have called up their full share of vaccines that they should be entitled to according to the proportion of the population. A few poorer countries in particular, including Bulgaria, Croatia, Slovenia, the Czech Republic and Latvia, ordered little or nothing of the more expensive vaccines, especially from Pfizer / Biontech and Moderna. Some other countries, including Germany, have made use of the batches that have become free. This actually resulted in a certain unequal distribution.

Briefly does not want to let this rest. He asserts that his commitment is not primarily in the domestic interest. Austria’s orders are in fact within the EU average. He is acting in the service of European solidarity, says Kurz. Before the summit, he repeated his call for a compensation mechanism. It is important to look at the issue on a “meta level”: The EU must absolutely prevent the existing gap in vaccine distribution from widening.

The Chancellery in Vienna points out that, according to the current distribution formula, the lower third of the EU will not be able to vaccinate the 57 percent of the population by summer, which according to current knowledge is necessary to achieve so-called herd immunity. Epidemiologically, so the argument from Vienna, it would pose a threat to everyone if the pandemic continued to rage in the south-east of the EU and new mutants developed.

No room for solidarity

When the EU ambassadors discussed Kurz’s approach for the first time a week ago, the Austrian representative met with rejection: the relative undersupply is the responsibility of the states concerned. And the vaccine is currently such a scarce commodity everywhere that there is no room for solidarity for the time being. The German EU ambassador Michael Clauss then announced in a so-called wire report to Berlin that the initiative had received “greater attention”.

Trust in our well-founded corona reporting and secure 30 days of free access to FAZ.NET with F +.

The EU Commission has made it clear that deviating from the current distribution method, even in the case of deliveries that have not been allocated, is an “extreme challenge” for political and contractual reasons, writes Clauss in the report submitted to the FAZ. The other states had rejected the six states’ criticism of the distribution. Clauss also emphasized – supported by the representatives of France, the Netherlands and Denmark – “the public criticism has damaged the EU itself as well as the integrity of the distribution mechanism and the vaccination process”. Bad talk falls on everyone’s feet.

Nonetheless, diplomats and officials have since quietly tried to find a solution. Diplomats reported whether this would happen is open. If necessary, negotiations would have to be continued after the summit. The basis for a solution are those 10 million doses of vaccine from Pfizer / Biontech that the EU Commission also organized for the EU for the second quarter. This amount should not be distributed among the states according to the number of people, as usual, but according to a key that favors the six states. Different quotas were under discussion until Wednesday. It only seemed certain that the greater part of the ten million doses should be distributed according to the normal population key and a smaller part according to another key.

Reactions: “A sad day for football”

Florian Silbereisen moored in Cape Town with the dream ship! Italy stops the planned opening of the ski resorts

Acting director Kosminski on anti-Semitism: “The protection of the constitution should...