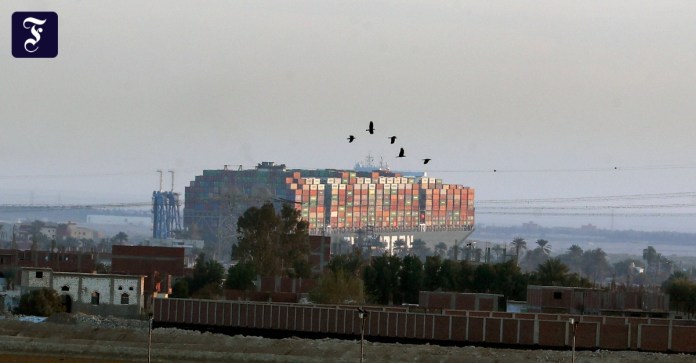 Bif the 400-meter-long container ship Ever Given ran aground on Wednesday, 52 ships had passed the Suez Canal every day. Each carried an average of 10,000 containers. This means that twelve percent of world maritime trade is handled through the Suez Canal.

Two projects are intended to reduce dependence on this bottleneck in the future. The United Arab Emirates intend to pump up to 17 percent of the oil that is still transported westward through the Suez Canal through the expanded pipeline from Eilat on the Red Sea to Ashkelon on the Mediterranean. In addition, Israel and the United Arab Emirates are planning to build a railway line from the Persian Gulf to the Israeli Mediterranean port of Haifa.

Joint venture with the Shah

The discussion on how to reduce the risk of this bottleneck began after the Six Day War of June 1967, when the Israeli army had conquered the Sinai Peninsula. Because the Suez Canal remained closed until 1975. So Israel and Iran, which was still ruled by the Shah, founded a joint venture to build an oil pipeline from Eilat to Ashkelon. Iranian tankers now delivered crude oil to Eilat, which was consumed in Israel or transported from Ashkelon to Europe. This meant that the Iranian tankers did not have to use the route around the Cape of Good Hope.

The cooperation only ended when the Shah was overthrown in 1979 and the Islamic Republic of Iran renounced this marketing channel. To this day, Iran is suing Israel in arbitration courts to get its share of the then joint venture. In 2015, an arbitration tribunal in Switzerland ruled that Iran was entitled to compensation of $ 1.1 billion. Because of the embargo on the country, the money was never transferred.

The 254-kilometer pipeline is expected to have a capacity of 600,000 barrels a day; in the Eilat area there are oil stores with storage space for 23 million barrels. In recent years the pipeline has allegedly pumped oil from Russia and Azerbaijan destined for Asia. However, there are no official announcements.

Now the United Arab Emirates want to use the pipeline. To do this, they want to set up an investment fund with Israel with allegedly ten billion dollars. That was supposed to happen when Israel’s Prime Minister Benjamin Netanyahu visited Abu Dhabi in early March. The trip a few weeks before the election in Israel did not take place. But the plans remain.

A deep sea port on the Red Sea?

One of the projects, whose financier is to be the main donor, is the Israeli port of Eilat on the Red Sea. Israel wants to dig a deep-sea port there, which can be approached by heavy tankers that either come from the Persian Gulf or, in the future, will travel to Israel from the coast of Saudi Arabia. Crude oil could then be transported via the pipeline between Eilat and Ashkelon, which has existed for decades but needs to be repaired and expanded, which would no longer have to take the detour by ship through the Suez Canal.

Representatives of the Israeli state-owned Europe Asia Pipeline Company (EAPC) signed a letter of intent in Abu Dhabi in October last year with the Emirati-Israeli joint venture Med-Red, which aims to transport oil from the Emirates to Europe via Eilat.

Another project of the planned investment fund concerns a rail link between the port of Haifa on the Mediterranean Sea, through Jordan and Saudi Arabia to the Emirates on the Persian Gulf. The Israeli route between Haifa and Bet Schean on the border with Jordan already exists. What is missing, above all, is the expensive rail link through Jordan, which has so far been neutral to the project.

While the Eilat-Ashkelon pipeline is already being specifically planned, the railway connection still seems to be a distant dream for the future. The Emirates and Israel have been examining the railway line project since 2019. And the then Minister of Transport, Yisrael Katz, spoke of it in 2017. Then products could be transported between the two countries in less than two days, which today takes up to twelve days through the Suez Canal.

Both projects, the pipeline and the railroad, have been moving forward since Israel and the Emirates normalized their relations last year. What will be to their advantage, however, is the damage done to Egypt, whose transit fees will decrease.

Wild scenes at Semmering: “I’ve never seen anything like it” –...

On the way to two-thirds democracy? | SN.at

Fear of a bloody escalation in Myanmar

Five candidates and an insider tip – who will be Favre’s...

After a train accident – rail traffic between Zurich and St....