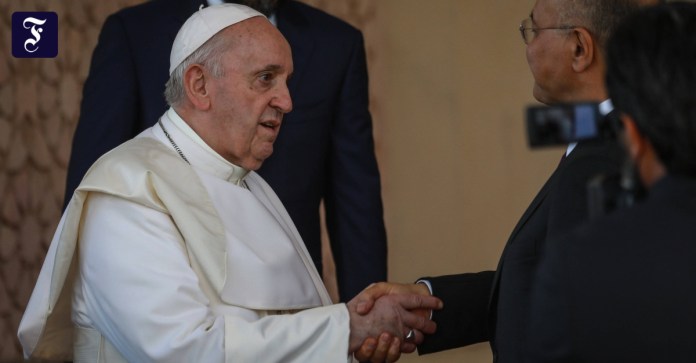 GAt the beginning of the Pope’s trip abroad, there was a clear difference compared to all 32 before. The car with the registration number SCV 1 – the abbreviation stands for “Stato della Città del Vaticano”, ie “State of the Vatican City” – which the Pope uses to travel short distances when traveling far away, was the case in Baghdad not one of the small vehicles generally preferred by Francis. It’s about an armored limousine, by the way from a Bavarian car manufacturer. The security guards of the Iraqi government had insisted on the use of an armored vehicle because of the particular danger in the country. And the Pope and his bodyguard complied.

Political correspondent for Italy, the Vatican, Albania and Malta based in Rome.

Shortly before 2 p.m. local time, the “papal aviator” from Rome touched down on the runway in Baghdad. On the tarmac, there was the usual protocol-based welcome by the Prime Minister. Mustafa al-Kadhimi was clearly delighted to be able to receive once again a distinguished guest and a very special one: only a few heads of state and government visit Iraq because of the security situation. On Friday there was also the most beautiful spring weather. Two children in costume presented flowers. A band played Beethoven’s “Ode to Joy” in a kind of endless loop. Later there were typical national performances in the VIP area of ​​the airport building by dancers and singers in different national costumes. Not everyone had the right mouth and nose protection, the enthusiasm was too great.

During the brief greeting of the journalists traveling with them on the plane, Francis had previously expressed his satisfaction that after almost a year and a half of being locked away in a pandemic behind the walls of the Vatican, he would finally be able to travel again. Albeit under difficult pandemic and security conditions. Francis saw the visit to Iraq as “a duty to a country that had been tortured for many years”. Pope John Paul II wanted to visit Mesopotamia in 2000. The already well advanced travel plans had to be broken off because of the worsening conflict between Saddam Hussein and the Americans.

From the airport, Francis drove behind darkened bulletproof glass through the freshly paved and mostly deserted streets of Baghdad in an armored convoy to the presidential palace. Only in a few places were people waving flags and applauding people in the street, disciplined behind the barriers. The last few meters before the welcome gallery, already on the premises of the presidential palace, the Pope’s car was escorted by a horse-drawn squadron and finally by a train of bagpipers.

President Barham Salih was also clearly happy about the important guest and the beautiful weather at the welcoming ceremony. Francis is the first Pope ever to visit Mesopotamia. As a “pilgrim of peace” he wants to encourage Christians who have been living in the biblical land for almost two millennia, but who are now acutely threatened, and also to call on Muslims and Christians as well as members of other religious communities to be fraternal.

The Pope has repeatedly affirmed that he knows about the difficulties of such a trip under pandemic conditions. Iraq is getting hit by a second wave of infections while the vaccination campaign has just begun. “I will try to follow the instructions and not shake hands with everyone,” Francis had assured on the flight to Baghdad.

“But I don’t want to be too far away either.” In any case, the Pope shook many hands during the first hours of his stay in Iraq. He wore the unpopular face mask, however, mostly in a disciplined manner. At the start of a historic visit, the guest and host were visibly relieved. And happy.

In the afternoon, Francis visited the Sajjidat-al-Najah Cathedral, which was the target of an attack by the Al-Qaeda terrorist network in 2010, which killed at least 50 believers. “Her death reminds us strongly that incitement to war, attitudes of hatred, violence and bloodshed are incompatible with religious teachings,” said Francis in an address to Christian officials.

Because of the corona pandemic, only a few representatives of the Christian Church were allowed to attend the meeting. They sat far apart in the pews. The area around the cathedral was strongly secured.

Germany defeated Brazil in the main round 31:24

Queues at the buffet: Corona chaos in the World Cup hotel...

Egle missed the podium in Oberhof despite the track record

More than 500,000 people in Germany vaccinated against the corona virus