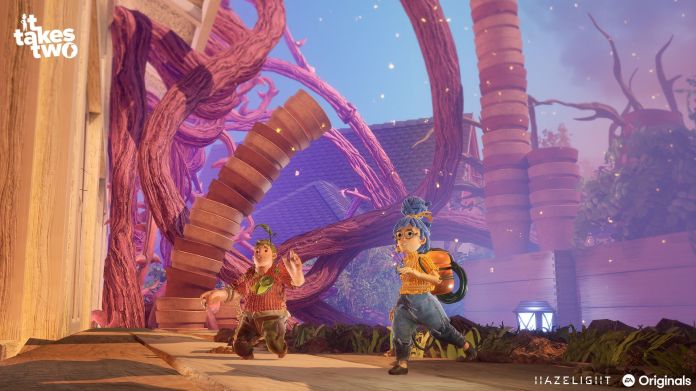 With “A Way Out”, Hazelight Studios brought a great co-op game onto the market in 2018. The new “It Takes Two” tops that again.

With “A Way Out” in 2018, Hazelight Studios turned competitors pale. The co-op title appeared without much fuss and became the best the genre had to offer: A Prison Break story, online or local co-op gameplay, exciting tasks for two, fine music and simple controls – and none Rip off! Because to play the title online with a friend, the full version owner could simply invite a comrade into the game for free.

Even then, the jubilation was great in the test, now it is even bigger. The studio has now released the new co-op game “It Takes Two” for PC, PlayStation 4 and 5 as well as Xbox One and Series X | S through the publisher Electronics Arts. This looks like a children’s adventure and offers funny scenes, but behind the innovative design hides a game with a lot of emotions and depth, which also demands decent gameplay. And as with the predecessor, co-op gaming is mandatory here, because there is neither a single-player mode nor an AI accompaniment for single players.

The main characters are Cody and May, a couple who, after a happy time together, are now separated from the argument more and more. Daughter Rosie notices that too, which triggers magic. Rosie’s tears transform the couple into dolls, who now have to pull themselves together in a mysterious world in order to get their old life back – and to save the relationship. The plot shows no big surprises, but a lot of depth and emotion.

In terms of play, however, “It Takes Two” is more difficult to classify. Sometimes 3D platformer over long stretches, sometimes puzzle and adventure game, sometimes role-playing and action or fighting cracker, the title changes locations as often as the genre, which makes it one of the most varied games of the decade. You won’t be overwhelmed, however, because every change of genre and every new mechanic is also integrated into the plot and naturally fits into the story.

Perfect cooperation is everything

For our shrunken dolls, the play world consists of their own four walls and the surrounding area, but from a completely new perspective. In the doll’s body, not only the tool shed or the children’s room, but also a vacuum cleaner or other household appliances can be entered and explored. Here, too, you don’t just work with standard backdrops: The journey through the vacuum cleaner becomes a platform and puzzle passage, at the end of which you face the old vacuum cleaner – whose feelings were hurt by a new vacuum cleaner.

By the way, nothing in the game that is good works without cooperation. A game cannot involve two players any better. Sometimes a player has to slide open a device to create a passage for the co-op partner, sometimes a gamer has to shoot wooden nails into boards so that the other can shimmy across huge abysses. “It Takes Two” also uses far more complex mechanics: In the course of the game you can change your body size, create clones of yourself and manipulate time.

The puzzles are tricky, but always solvable, but the platformer passages are often not for beginners either. While jumping and hanging passages are all about precision and the smallest mistakes can lead to a crash, lightning-fast reactions are sometimes required in running and sliding sequences or when moving over earth, through water or in the air. Again and again, funny utensils are used as a vehicle with which one can ride through the game world. Where else did you get to fly through the air in underpants or hop around on frogs?

Again and again, your mouth stays open when it comes to the mechanics: Sometimes there is a sight or noise bar to keep an eye on during stealth passages like in “Assassin’s Creed”, sometimes you fight with enemies with a life bar to get ahead and sometimes the display changes from the split screen to a shared full-screen mode or from 3D to 2D, which is appropriately accompanied by the action. As much as an “It Takes Two” accuses, it neither confuses the players, nor does it seem simply copied from other games. Well done!

The game decides for itself how difficult it is

The most important instrument of the player is and remains communication. Tricky passages almost imperatively require verbal coordination between the partners, regardless of whether they are online or offline. But that’s not all: It is always easier to play with a friend who has gambler experience and with whom you can coordinate with a few words. With great silences and strangers, on the other hand, you slide from oops to oops. Another big plus for the game: This time, only one version of the game is needed to play co-op, the second player can be invited online for free.

Even if many passages are quite tricky to play, “It Takes Two” skilfully avoids moments of frustration. Every few minutes there is a checkpoint as a save point and if you die, the character can be revived in the same place in many situations. There is also another clever mechanic that revolves around the level of difficulty. Whoever masters the game well with his companion will feel the whole challenge. If, on the other hand, you repeatedly fail on enemies or passages, the game automatically turns back the level of difficulty, for example through fewer and fewer or easier opponents.

A jewel in every way

The game is also great graphically. In the approximately 15 to 20 hours of play – incidentally not drawn out by collecting tasks and collectibles, because they don’t exist here – you get to see great things in the linear adventure with some explorable locations with thousands of interspersed but unnecessary activities . With smooth gameplay, even the smallest details are razor-sharp and the cute characters with their excellent animations are instantly loved. The surroundings couldn’t be more varied either.

In such an exceptional game, one likes to overlook minor flaws, but they should not go unmentioned: The soundtrack has only been done in English so far, the camera rarely loses sight of the character and the new DualSense controller PlayStation 5 is not used for new control functions. Apart from that, “It Takes Two” is a terrific game that overcomes genre boundaries effortlessly and should let every player do one thing: to look for a teammate immediately to experience it for themselves.

Developers confirm work on a DLC

Pope reminded of the persecution of Christians on St.

Opposition files no confidence in the Slovenian government

Why the euro is rising – pound under pressure | ...

Corona virus in Germany and worldwide: Hundreds of workers are stuck...