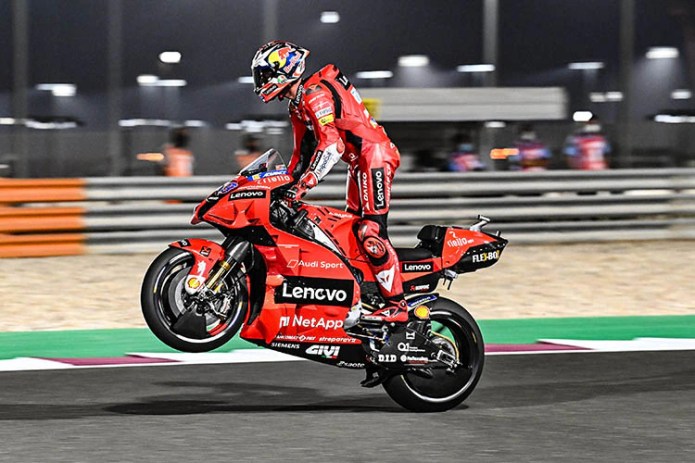 The Australian Jack Miller (26) shot the factory Ducati on Friday in Doha despite a slip to the MotoGP day’s best time and thus brings back memories of his legendary compatriot Casey Stoner.

The Ducati works team newcomers Jack Miller and Francesco “Pecco” Bagnaia made a strong statement on Friday at the Losail International Circuit and grabbed positions 1 and 2. The two Desmosedici stars at the top were only 0.035 seconds apart.

Miller doesn’t seem to have the slightest problem with his role as a figurehead at Ducati: “The fall in FP1 wasn’t bad. I am fine. It was the combination that I used the medium tire and it was the wind too. The boys told me that Zarco fell. I got out and also fell on the first lap. ”

Miller used two different panels, used an unpainted, older variant after the slip in FP1. “It was just because we didn’t have enough disguises. So we wanted to be on the safe side. I prefer the new disguise. It’s hard to tell what the difference is. I like it more, it looks cooler and me I will use them safely in the race. “

Is Miller the driver to beat? “I think the times are incredibly close. I was only seven thousandths away from the record. And Zarco was only just behind me in fourth. I’m a little afraid of qualifying, where it will take us. Lots of guys are quick. Franky is incredibly fast and has not changed the tires. I had to change the tire after the fall. From my point of view, Franky is the driver to beat at the moment. Saw pecco out of the box, it looks very nice. It’s always fun when a driver feels so comfortable with the motorcycle. “

The FP2 session was interrupted for about six minutes because of some pieces of wood that were blown onto the runway from a tower.

Miller on the problems with the rear tires, which were still an issue in 2020: “I’ve never had a problem with it, unless the grip level is really bad. The level of liability is high here in Losail. We have to wait until we get to other tracks with less grip. I would like to say that we solved it. “

Miller also reveals: “During the set-up, we first tried something for the afternoon. But then we went back to the setting from the test in the evening. The grip level was a bit low in the afternoon, so we initially made the bike a bit higher. “

Further construction on Nord Stream 2 at the end of January...

EU-China investment pact is in place