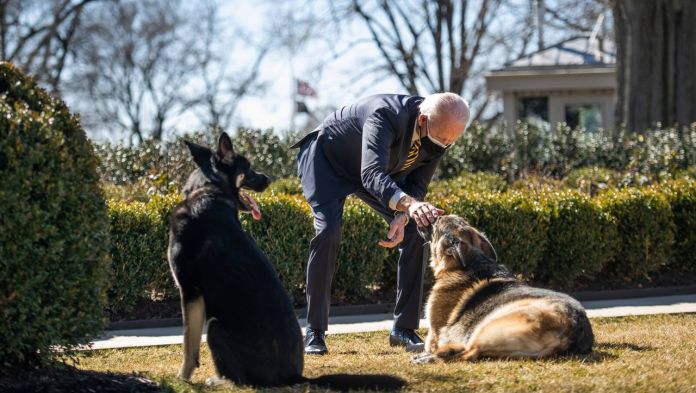 President Joe Biden’s two sheepdogs are back at the White House. A spokesman for First Lady Jill Biden confirmed this on Wednesday upon request. The younger of the two dogs, “Major,” had meanwhile received “additional training,” the spokesman continued. Biden had already announced in an interview with the broadcaster ABC that a dog trainer was working with “Major” after an incident in the White House.
At the beginning of March, “Major” had injured someone. He and the second Biden dog “Champ” then spent a few days at the Biden family home in the state of Delaware. The White House had stressed that their stay there was planned in advance because the President and First Lady were traveling.

Biden’s spokeswoman, Jen Psaki, had described the dog incident in a somewhat awkward manner at the beginning of March: “Major” had been surprised by an “unknown person” and had reacted in a way that led to a “minor injury” in this person. It was not more specific.

Biden also downplayed the incident in the ABC interview and emphasized that “Major” was a “cute dog” who only got a fright when two unknown people suddenly appeared around a corner. The President also stressed that he had by no means banned “Major” from the White House.

Trump was the first president in more than 100 years to not bring a dog into the White House. “What would I look like if I was walking a dog on the White House lawn?” Trump asked once, pulling a grimace. Biden used this in the election campaign for an ironic commercial with the title “Choose your people wisely”.

Champ and Major could probably receive animal reinforcements in the future. According to reports, the Bidens apparently also want to buy a cat. Details about the “First Cat” are not yet known.

2. Bundesliga, Klaus Allofs: “Break was good for you”

Nurses in Stuttgart: In action on the Covid-19 front – Stuttgart

Julian Nagelsmann from RB Leipzig annoys a penalty for Paris

The federal and state governments want a longer lockdown until mid-February...