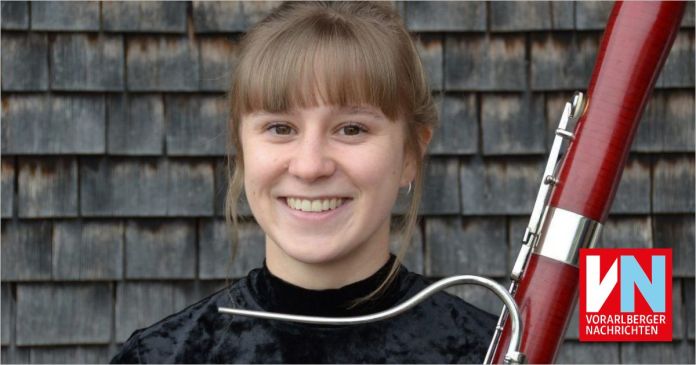 The bassoonist Johanna Bilgeri (19) has won many prizes and is involved in various formations.

Hittisau When Johanna Bilgeri plays the bassoon, soft tones sound that bring out the unique sound spectrum. “The versatility of the instrument is demonstrated by the fact that it works excellently in various combinations. It is possible to be a soloist or to play chamber music with strings or wind instruments. The sound can be very variable, ”says Johanna Bilgeri. At the age of five, the Bregenzerwald native had her first recorder in hand, and a year later she switched to a bassoon fifth that was suitable for children. At the Vorarlberg State Conservatory, she completed basic studies with Professor Allen Smith. She is currently studying at the University of Music and Performing Arts in Vienna.

It is very important to Johanna Bilgeri to get involved in a wide variety of formations and to work with experienced musicians. She gained orchestral experience with the Quarta-4 Länder Youth Philharmonic under Christoph Eberle, the Sinfonietta Vorarlberg, the Vorarlberg Symphony Orchestra, the Vienna Jeunesse Orchestra and the Liechtenstein Symphony Orchestra. From 2018 to 2019 she played with the Ensemble Esperanza, which consists of scholarship holders from the Liechtenstein International Music Academy and was awarded the Opus Klassik.

Three years ago she teamed up with Anna Eberle (oboe) and Paul Moosbrugger (clarinet) to form the Trio Mélange, which is known for concert moments at a high level. Last year, the three young people from Vorarlberg took first place at the podium concerts in Schaan with pieces by Piazzolla, Ibert and Dubois.

The woman from Hittisau also performed excellently in other competitions. This year she was named state winner at Prima la musica. “I see such foreplay as a chance to set goals for myself, whereby it is important to keep a distance and not to take the results too much to heart. The music remains a matter of taste; it cannot be measured with a stopwatch like in sport. ”From the bassoonist’s point of view, it is important to be satisfied with your own performance without building up too much pressure. “It is part of the musician’s life that anyone who later wants to be part of an orchestra has to compete with others.”

She used the first lockdown to throw herself into new concert literature with full motivation. The longer the concert-free time lasted, the more the musician lost the opportunity to be on stage. “I am very happy that things can slowly start again. It is an affirmation when the mood and feelings you want to convey resonate with the audience. The contact creates magic. ”At the beginning of April she will present Stravinsky’s“ Story of the Soldier ”in the Kosmos Theater with the newly founded chamber orchestra Camerata Musica Reno under the direction of Altach conductor Tobias Grabher (23). Back on stage, the Bregenzerwald native has set herself the goal of providing high-quality musical experiences and conveying profound emotions to the audience. Miriam Sorko

Performances of Stravinsky’s “Story of the Soldier” on April 3rd, 4th and 5th, 5 pm, in the Theater Kosmos in Bregenz: www.theaterkosmos.at

Shares Vienna end: Do & Co and Lenzing in the focus...

Half of the Viennese with foreign roots