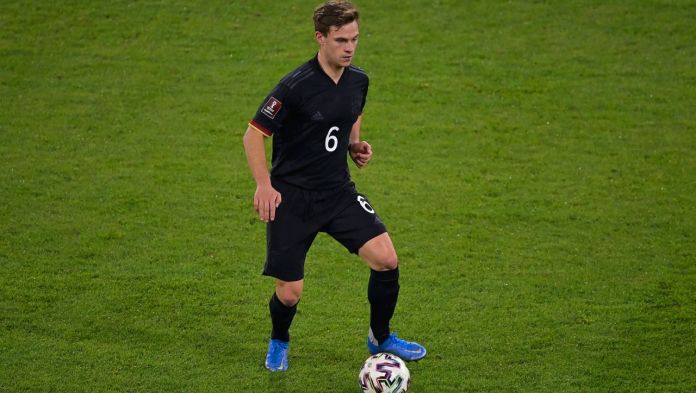 Return of the game: 2020 ended with a debacle in Spain for the German footballers, 0: 6 in the Nations League. At that time you saw a helpless national coach Joachim Loew, who was later to announce his retirement from the DFB after the European Championship. But someone who hadn’t been seen at the time was Joshua Kimmich; the 26-year-old was absent due to the consequences of a meniscus damage. He’s back now – and against Iceland, the Munich was the head of the team. In the first half he played more passes alone (91) than eleven Icelanders combined (90), and there were important passes. Kimmich was involved in the two hits after just seven minutes. “It’s really fun to watch,” said the new RTL expert Uli Hoeneß. You don’t want to contradict the former Bayern boss.
Result of the game: Germany started the year of the European Championship with a win. 3-0 (2-0) was the final score in the World Cup qualifier against Iceland, the first game since Löw announced his resignation after 15 years as national coach. Read the match report here.
Off to Qatar: The Iceland game marked the beginning of the qualification for Qatar 2022. In a SPIEGEL poll, a large majority voted for a boycott of the World Cup: Read more about the fall of man in world football. Boycotting the World Cup, the national associations will hardly do that for financial reasons alone. And the athletic qualification should not fail from a German point of view: The other opponents are Romania on Sunday and North Macedonia on Wednesday (both 8.45pm). After the EM, Liechtenstein and Armenia follow, followed by the second legs.
Embassy from Norway: But here and there you can see something like dissatisfaction with the Qatar tournament. Before their first qualifying game, the Norwegian national team had denounced the human rights situation at the next World Cup host with a T-shirt campaign and thus reacted directly to the boycott demands from the Norwegian league.

DFB team follows suit: The German footballers followed up with a similar action. However, only anonymous, without a clear arrowhead towards Qatar. Leon Goretzka later indicated that they did not agree with the human rights situation before the World Cup. “We want to make it clear to society that we are not ignoring this.” He did not mention Qatar explicitly.

Only the virus loves the international break: International matches, that’s the time when the professionals leave their club bubble, they travel across the continents, meet new contacts. They do a lot that the government and experts advise against. Ideal conditions for the coronavirus, unfortunately just not for fighting pandemics. See next point.

The game night: Regular series of tests were carried out on the DFB team, and three team buses were used from the hotel in Düsseldorf to the venue in Duisburg. In the morning, a corona infection became known to Gladbach’s Jonas Hofmann, Leipzig’s Marcel Halstenberg, with whom Hofmann had played backgammon the evening before, was isolated as a precaution. Pictures in the social networks had shown their game night – which supposedly lasted only 15 minutes. The health department did not identify any other contact persons. That does not have to mean that the chain of infection has been stopped.

Munich contacts: At the beginning of the game, the FC Bayern professionals kept to themselves. Kimmich played a chip ball into Serge Gnabry’s barrel, which fit into the back area of ​​the penalty area – and there the third Bayern star of this combination, Leon Goretzka, was just right. He hit the right corner (3rd minute). Iceland was allowed to take a deep breath, then the next Munich player drew attention to itself: Leroy Sané marched away after a Kimmich pass and prepared the second goal by Chelsea professional Kai Havertz (7th). The fifth man from Munich, Manuel Neuer, hardly had to be active in goal. The sixth Bayern man later came into play: Jamal Musial, the youngest DFB kicker since Uwe Seeler.
Tormaschine Gündoğan: Last autumn, İlkay Gündoğan fell ill with Covid-19. He described the course of the illness as a “bad two weeks”. All the more astonishing is the impressive form the Manchester City professional is in: 16 goals in 34 games this season at the club, against Iceland he scored the 3-0 with a placed long-range shot (56th). For the 30-year-old, it was just his 43rd international match, he has only played one World Cup game (in 2018 when he won the only game against Sweden) and has not yet played a European Championship game. Löw, that much is certain, can plan on his farewell tour with one of the best midfielders in the world at the moment.

The final word: “Jogi, that was a good start,” Uli Hoeneß called to the national coach after the first game in 2021. And here, too, they did not want to contradict.

The race with the virus

Alleged perpetrator from Lugano wanted to travel to Syria

Telescope at an altitude of 5600 meters is supposed to provide...